Clayton happy to be a part of another Ballyboden adventure 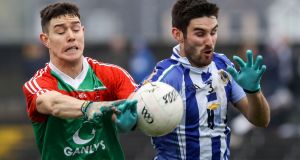 For a giant club, one of the largest in Europe by all accounts, there’s a light touch and a level of intimacy to being a Ballyboden St Enda’s player that Shane Clayton finds endearing.

In a 20-minute chat about tomorrow’s AIB All-Ireland club semi-final against Down club Kilcoo, the ’Boden defender uses the word ‘love’ eight times, the word ‘heart’ four times and describes the Firhouse Road outfit as a “family affair” with a “culture” of inclusion and warmth.

This is an organisation, for the record, that caters for well over 100 teams (a massive feat of logistical planning in itself) and has grown used to being disparagingly described as one of Dublin’s superclubs.

To an outsider it can seem like a footballing factory based in south-Dublin suburbia, just off the M-50, churning out players, but it’s never felt like that to players like Clayton on the ground.

“I don’t know what’s so special about Ballyboden but once you’re involved, you’re part of it,” he said.

“It’s the same with us, the players, we all love each other. There’s a real country club centre to it, all the executives are from outside of Dublin so they brought that in. So the numbers may be be big but the core is always there. That’s where the family affair comes into it.”

To underline his point, Clayton notes how Andy McEntee, their All-Ireland -winning manager in 2016, remains a regular fixture around the place despite moving on to Meath months after that triumph.

“He took it into his heart, he still keeps in touch, he tries to go to the games,” said Clayton. “He loves the club. You always see him knocking about. Anthony is the same.”

That’s Anthony Rainbow, the former Kildare All-Star who, after a period of slack following McEntee’s exit, picked up the reins in late 2017 and got things moving forward again.

“It was ridiculous,” admitted Clayton of the drop off after the All-Ireland win. “Everything just came at once and obviously we were never there before so we were probably enjoying it too much, rather than the likes of Corofin who just keep going and going. It’s so tough just to win Dublin, we really weren’t expecting to go that far that year. Once we got there it was like, ‘Jesus, this is the Holy Grail’. Then after that, Andy left. New management had to come in, that didn’t work out too well. Things just died off for a year or two.”

One of the things Rainbow did was to ignite a spark within the group again, to get players feeling the love.

“We put a focus on just enjoying football more and doing it a lot more skill -based,” said Clayton.

“There’s a big emphasis on culture. We’re hanging out a lot more together. That’s been good. It was just simple things, even going for food together. Running sessions, a couple of tough sessions, tough spin sessions. We were up in the Long Mile Road there in SBG. Things like that brought us together. It was just a buy-in.”

Within an evolving group of players, the constants have been evergreens like Conal Keaney, 37-years young and still thriving.

“He just loves the game, loves Ballyboden, loves football and hurling,” said Clayton. “He’s probably the best player in both codes to come out of Ballyboden. Us younger lads are looking at him thinking, ‘How are you still playing and delivering at a high level?’”

Declan O’Mahony is another thirtysomething with a lust for life and football that hasn’t diminished.

“He’s more focused than the rest of us,” said Clayton of the former Dublin midfielder. “He loves the game, loves Ballyboden. I think he’s playing the best football of his career.”

Keaney, O’Mahony, Michael Darragh Macauley and Darragh Nelson are the only current ’Boden players to have competed in all three of their county title wins between 2009 and 2019.

“His football speaks for itself,” said Clayton of Macauley who managed an apparent groin problem throughout the Leinster campaign.

Perhaps the greatest act of love from the players towards their club has been to return to this stage, winning the Leinster title in the year of their 50th anniversary.

“It wasn’t a motivation but we knew as a club it would be nice to mark it with something all the same,” said Clayton, an All-Ireland U-21 medallist with Dublin in 2017. “We knew the club gala would be more enjoyable if we had something to celebrate it with rather than just memories.”