Monaghan kick past Derry with room to spare

McKenna Cup round-up: There were also wins for Armagh and Down 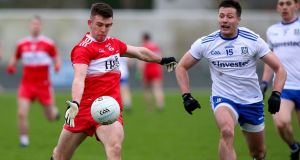 Monaghan got their campaign off to a winning start when they overcame Derry in an entertaining, if at times fairly low key, encounter that was played in Inniskeen on Sunday.

Monaghan started well and led by 1-3 to no score after just eight minutes, Aaron Mulligan with the goal, but Derry came more into the game and by half-time they had turned it around to lead by a point, 0-8 to 1-4, Emmet Bradley and Ryan Bell central to that turnaround.

In the second-half Derry extended theirlead to three after eight minutes, but from there to the finish Monaghan took an increasing grip on proceedings with substitutes Jack McCarron and Kieran Hughes having a big impact.

They drew level by the 18th minute and then re-took the lead with six minutes remaining.

Man of the match Aaron Mulligan then hit two excellent points to put Monaghan three up and Rory Beggan converted two long range frees - either side of Derry’s final score from Emmet Bradley - and Monaghan closed it out with a good point by Barry McBennett in stoppage time.

A turbo-charged second quarter display was the scaffold Armagh used to construct a facile opening round Dr McKenna Cup victory at Kingspan Breffni.

With the help of Martin Reilly’s penalty on 10 minutes, Cavan led by 1-6 to 0-7 after 21 minutes but thereafter they played a distinct second fiddle to a clinical Orchard County crew.

Cavan included five debutants in their starting lineup but it was Armagh rookie Conor Turbit who caught the eye most of all with a brilliant two-goal salvo either side of the half-time break.

Turbit’s first goal after 24 minutes was the marquee score of a 1-6 unanswered tally by the wind-aided visitors as they surged into a commanding 1-14 to 1-7 interval lead.

Armagh’s sharp-shooting was the major feature of the first round tie and Turbit’s rocket of a goal in the 42nd minute was out of the top drawer and all but sealed Cavan’s fate.

A late Liam Kerr goal sealed a comfortable victory for Down in Brewster Park on Sunday.

With 25 minutes played the low scoring flow to the game was evident, as both sides hit a solitary point each through Ryan Jones and Liam Kerr.

Ross McGarry and two Pat Haveron scores pushed Down clear, however Fermanagh responded before the break with scores from brothers Garvan and Conall Jones to leave it 0-3 to 0-4 at half time.

Down started the second half much the brighter and points from Jonny Flynn, Pat Haveron and Conor Poland moved Down ahead, 0-7 to 0-3.

A Conall Jones free and a fine Darragh McGurn score reduced the margin but Liam Kerr once again pushed Down clear, 0-8 to 0-5.

Conall Jones and Liam Kerr pointed again, while Liam Middleton put Down 0-10 to 0-6 ahead with five minutes to play.

Liam Kerr was to hit the only goal of the game and immediately from this Ross Carr added further gloss with a point for Paddy Tally’s side.

Darragh McGurn responded late for Fermanagh but overall Down were worthy of the victory in Enniskillen.

The same sides will once again meet in the Ulster Senior Football Championship in May.