Holden: Shamrocks history is an inspiration to players 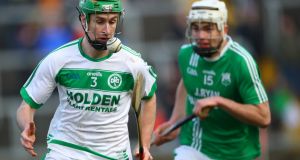 Joey Holden is asked to put his finger on exactly why Ballyhale Shamrocks have been so successful over the years, winning more Leinster and All-Ireland titles than any other club.

“Most people ask that question but I don’t know what it is really,” responds Holden, shrugging.

Then he offers an anecdote from his childhood which he reckons may provide some insight. He was a Henry Shefflin fan he says, naturally enough, though when his father asked him who his favourite Kilkenny player was he overlooked his club-mate.

“I said Andy Comerford and he turned on me and said, ‘What? There are all these Ballyhale lads on the team – you have to pick one of them!’” recalled Holden. “That was that, so! It was drummed into us that we were representing Ballyhale and with the history that’s there you want to emulate and respect that by doing your own little bit for the club.”

They’ve won 10 Leinster championships in total, three more than Birr, and seven All-Irelands, also three more than Birr, though the Offaly side won all of their trophies in a 16-year period between 1991 and 2007 while Ballyhale’s first provincial win was in 1978, 41 years before they collected their most recent one last month.

It points to a constant renewal and regeneration of resources which is all the more remarkable given that the marriage of struggling rural club sides Ballyhale, Knocktopher and Knockmoylan in 1972, forming the Shamrocks club, seemed an act of necessity more than love.

All that history counts for a lot locally and one local reporter covering the Kilkenny hurling beat was gently reminded during the recent Leinster championship run that the club’s name is actually Shamrocks, not Ballyhale Shamrocks.

Without a thriving town or a particularly large population base, it’s that sort of devotion that has bound the club tightly together over the years.

Slaughtneil, the small club from south Derry whom Ballyhale will play in the AIB All-Ireland club semi-finals on Sunday, have a similar story. Yet Ballyhale are still head and shoulders above the rest, home to Hurler of the Year nominee TJ Reid and reigning Young Hurler of the Year Adrian Mullen.

He and his Kilkenny colleagues missed out on a team holiday to Orlando to commit to the club’s cause though Holden isn’t overly concerned, another sign of the devotion that keeps Ballyhale at the very top level.

“We’re with Ballyhale in an All-Ireland semi-final so it’s okay for us, it’s more difficult on the partners that were looking forward to it,” he said. “They couldn’t go away during the summer because we were with Kilkenny. It’s hard on them so I do feel for them but sometimes you have to be selfish.”

Holden himself has been central to the turnaround in fortunes for Ballyhale since Shefflin took over for 2018. Prior to that, they exited the 2017 Kilkenny championship after a heavy semi-final defeat to James Stephens. They lost the second half of that game by 16 points yet have swept the boards since then, collecting back-to-back county and Leinster titles and an All-Ireland.

“Personally it’s not that I’ve changed anything that I’d been doing, it’s just doing the same things right and gradually building on it. Maybe don’t be as critical on yourself. Accept that sometimes your man is going to get the ball and sometimes he’s going to score, it’s more what can you do to make yourself better in those situations.”

Holden is careful not to downplay raging underdogs Slaughtneil.

“It’s a mental thing that you’re playing a northern team but it’s not [easy],” he said. “Like, I was in America in 2013 and hurled with some savage hurlers from the North, a lot better than I was back then and I have no problem admitting that.”