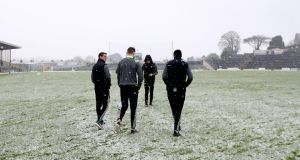 The 2020 competitions are beginning towards the end of 2019 because a full year appears too cramped for the GAA schedule. Photograph: Inpho

Many GAA ghosts of Christmas past must look aghast at the life of the modern day player and wonder if there’s a season to be jolly these days.

There isn’t for the senior intercounty players of Limerick and Clare. They clash in the Munster Hurling League next Sunday. On the same day the footballers play each other in the McGrath Cup.

They are among a number of 2020 competitions beginning towards the end of 2019 because a full year appears too cramped for the GAA schedule.

Connacht’s FBD League at least adheres to the calendar. It won’t start until the following Sunday but will struggle for attention because the All-Ireland club semi-finals take place the day before.

For those involved the prospect of pushing through the pain barrier in deep winter ground and freezing conditions makes for meagre pickings this week. Revisiting the taste of mince pies is no one’s idea of a New Year’s resolution.

Of course they’re not alone in making do with scanty fare this Christmas. Pushing the indulgent boat out isn’t an option either for many soccer and rugby players who feature on the festive sporting menu.

The difference is of course that in those spheres elite performers get paid to swap turkey for the treadmill and mulled wine for a military press.

The best GAA players are amateurs yet are increasingly required to lead lives that put a lot of professionals to shame when it comes to abstinence and dedication.

If players can manage superhuman dedication to their sport and also juggle career, education and family, not to mention the business of living the best years of their lives, then good luck to them

For instance Waterford’s 2016 Hurler of the Year Austin Gleeson has already cancelled Christmas.

“This year I’ve made a conscious decision myself that I’m not going to do that (enjoy Christmas.) I’m going to train and really sew into it,” he was widely quoted as saying last month.

“Everyone is exactly the same. It’s going to be a 10 month process instead of saying ‘oh, we’ll be grand if we start really training hard in January.’ Everyone is just going to go at it now from November,” Gleeson added.

Such sacrifice makes waiting until January to start preparing for a summer championship season seem like wimping out.

Obviously there is something very laudable about dedication when there’s no financial pay-off. It’s also voluntary. No one’s holding anyone at gunpoint and making anyone do something they don’t want to.

However in big picture terms it contributes to a culture that equates stoicism with success and increasingly makes what is supposed to be about enjoyment an exercise in asceticism.

Like everything else it permeates from elite inter-county competition down to club level. Players are required to ‘buy in’ to programmes that often have more to do with control than coaching and put a premium on pain over pleasure.

And of course whatever works for consenting adults is their own business. If players can manage superhuman dedication to their sport and also juggle career, education and family, not to mention the business of living the best years of their lives, then good luck to them.

But reports of an up to 75 per cent drop-off rate in participation between the ages of 21 and 26 suggest a lot of people come to the conclusion that something has to give so not surprisingly the demands of what is essentially a hobby get cast aside.

Last week half a dozen Waterford senior footballers indicated they couldn’t meet the requirements needed to play for their county anymore. This is becoming more and more common as amateur sportspeople decide, for various reasons, that enough is enough.

Sure enough it prompted ‘tut-tut’ headlines about nearly nine out of 10 players ‘binge-drinking’ during their off season. Three out of four apparently go completely Charlie Sheen by having the nerve to indulge during pre-season too.

Considering the season that’s in it coverage of these figures oozed a curious sanctimony and almost invariably didn’t bother pointing out that binge-drinking is defined as six units of alcohol or more.

That’s three pints to you and me, barely enough to wet the whistle of many of the finger-waggers and hardly qualifying as any kind of debauch for young, fit athletes who might dare to pursue a similar sort of social life to their peers.

Professional rugby and soccer players are allowed indulge during their season but GAA players are seemingly expected to behave with monastic restraint even during off-season.

It’s reflective of the demands required to be competitive at the top level, demands which are surely unsustainable in terms of juggling the GAA’s core voluntary credo with the reality of elite competition.

It means the Gaelic Players Association is on firm ground when arguing that while no one wants pay for play, players shouldn’t have to pay to play. That’s largely a financial tot but the demands on players means there’s also a personal cost.

Talking recently to a number of former inter-county stars that didn’t retire in the dark ages they were all unanimous in being grateful for their playing days being in the past.

An element of nostalgia might be involved in that but not enough to counter the argument that it’s a poor look-out for any amateur pursuit when it creates a culture which requires Christmas to be reduced to another date in the gym.

It’s little wonder more and more opt out, choosing instead to live a life the rest of us might recognise. That might be regressive in sporting terms but right now progress looks a joyless pursuit.