Slaughtneil still waiting for reality to catch up with ambition 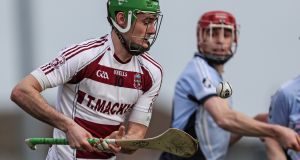 Slaughtneil’s Christopher McKaigue: ‘No matter how it goes, we can say that we faced three of arguably the greatest club hurling teams from the last 15 years.’ Photograph: Laszlo Geczo/Inpho

When Chrissy McKaigue talks about Slaughtneil wishing to gain national recognition, he is driven by ambition yet confronted by the painful reality that it’s unlikely to happen. Not this year at least.

To finally win an AIB All-Ireland club semi-final, after claiming three Ulster titles in the last four seasons, and a seven-in-a-row within Derry, they’ll have to dethrone holders Ballyhale Shamrocks on Sunday.

The Kilkenny club have current All-Stars TJ Reid and Colin Fennelly in attack while Adrian Mullen, the reigning Young Hurler of the Year, lines out too, prompting bookmakers to predict a landslide double-digit winning margin.

It must all feel a bit like deja vu for the small club from south Derry, whose previous All-Ireland semi-finals were also against marquee opponents: Cuala, the former back-to-back All-Ireland winners, in 2017, and ex-All-Ireland winners Na Piarsaigh, in 2018.

I think we’re in a better place now, we’re more experienced and the age profile of our team is better

“Once we face Ballyhale, no matter how it goes, we can say that we faced three of arguably the greatest club hurling teams from the last 15 years, that wouldn’t be unfair to say,” said McKaigue, the club’s dual star who captains the Derry footballers.

Run for their money

What sustains McKaigue and Slaughtneil’s hope of “making a mark at national level”, aside from the fact that their camogie counterparts are three-in-a-row All-Ireland winners, is that they gave Na Piarsaigh a run for their money in 2018, leading early in the second half. For McKaigue’s money, Na Piarsaigh and Ballyhale could be classed in similar terms, and he’s adamant that Slaughtneil have improved since.

“I think we’re in a better place now, we’re more experienced and the age profile of our team is better, we’ve unearthed a couple of underage players that have come through,” said McKaigue.

“Whether that’s good enough to beat Ballyhale, I can’t answer that right now, but I can say that we’re in a better place than we were against Na Piarsaigh, and on another day we might have been good enough to do it that day.

“We had injuries then too and there was sickness in the camp. Whether we’d have beaten Na Piarsaigh I don’t know, but I’d like to think that this year we might get a little bit more of a favourable run with the things we can control and see where that takes us.

“Looking at it coldly, are Ballyhale better than Na Piarsaigh? Yeah, but I think Na Piarsaigh and Cuala can definitely claim to be in that same ballpark as Ballyhale, so at least we can take confidence from that.”

We’ve had to work really hard on our technical skills, which we have zoned in on the last while

McKaigue acknowledges that geography continues to be Slaughtneil’s biggest problem when it comes to establishing themselves beyond Ulster.

“We’re obviously situated at the north end of the country so the closest challenge game we’re going to get is a Dublin side or something like that, so you’re looking at three hours,” he shrugged.

It leaves them playing a guessing game each time they get out of the province, wondering if they’ve done enough to close the gap with the southern teams.

“Calling a spade a spade, technically, we would be a little bit behind Kilkenny hurling teams because we’re just not exposed to the same level of intensity or level of hurling, so we’ve had to work really hard on our technical skills, which we have zoned in on the last while,” said McKaigue. “We think our fitness is usually at a decent level so we’re humble enough to know what we have to work on and that’s what we’ve gone after the last while, trying to get up our technical level with friendly games and our preparation.”

A healthy siege mentality, sourced from a sense that they didn’t receive enough credit for their previous wins in Ulster, is fuelling their desire to achieve a little piece of history.

“Creating the siege mentality is not something we initially set out to do but it probably did no harm to create that type of environment, it gave us a wee bit of an edge, but I think for our group it was really about creating a bit of history and consolidating our place now as one of the best Ulster hurling teams around,” said McKaigue.