The sporting decade that was: Two semi-finals, one unforgettable weekend 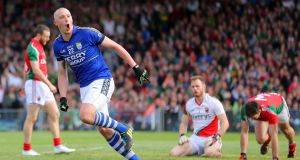 It was the evening which gave Kerry the second coming of Kieran Donaghy.

The incoming traffic to Limerick city was ridiculous from about midday - windows open, radios blaring, impatient faces from deepest Mayo - and the August day was parched and salty. Parking was a feat in itself. Everyone had bitched about dragging Mayo and Kerry to the Gaelic Grounds for an All-Ireland semi-final replay. A US college football game had been booked for Croke Park. Typical Gah, everyone grumbled. Putting money first.

As it turned out, Mick Mackey’s old stomping ground was the ideal place for such a unique occasion. The stadium was the perfect fit and on a dusty Saturday evening, embers flew.

When you talk about sporting moments, you are talking about how you felt as much as what you saw. Writing for this publication, it has been a privilege to be present for some of the more significant sporting moments of the past decade.

And I’d certainly have no complaints about being transported back to the London arena in the hours around Katie Taylor’s gold medal fight or the tense night in Nizhny last summer when Croatia completed Lionel Messi’s miserable World Cup with a 3-0 win World Cup win over Argentina or the rainy night in Lille in the European championships when Robbie Brady gave a new generation of Ireland fans their Giants Stadium moment.

There’d be no complaints, either, about returning to the Roger Federer-Martin del Potro semi-final at Wimbledon, a three-set Olympic Games cliffhanger that lasted for four and a half spellbinding hours and finished 19-17.

But the evening in Limerick keeps fizzing and crackling away through the bedlam of other stuff because it felt like a crossing point. Everything about the weekend was unpredictable. It was the evening which gave Kerry the second coming of Kieran Donaghy. And James Horan would resign his post in a kind of kitchen area in the Gaelic Grounds at around half past nine that night. Mayo fans would assume it was all over: nothing was.

By Sunday morning, everyone was in agreement that this was one of the greatest football games, let alone semi-finals, in living memory. But by that afternoon, it was eclipsed by what happened when Donegal, after riding out an early blitz from the All-Ireland champions, delivered a coup for the ages. Dublin would use the lessons from that weekend to re-emerge has a force that has proven unbeatable since.

It was an unexpected and electrifying 48 hours that it felt like a one-off. And then, two days later, as one of the blessed ticket holders heading through the doors of the Hammersmith Apollo to see Kate Bush perform live in her first stage shows since 1979, I clocked someone in a Donegal shirt in the crowd. Cloudbusting and all of that . . .