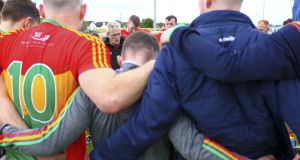 Carlow manager Colm Bonnar speaks to his players at the end of the Leinster Hurling Championship game against Kilkenny at Netwatch Cullen Park last May. Photograph: Ken Sutton/Inpho

Nowhere to run, nowhere to hide. When Divisions 1A and 1B of the hurling league were restructured and refurbished last year, the job was done to the specifications of the bigger teams. The league had been cut-throat and helter-skelter for most of the decade and that all felt like a bit too much hassle in the castle for the early months of the year. They might not have been sick of it, exactly. But they were definitely sore and tired.

So the cards got shuffled and Division One got split into two groups of comparable depth. Neither is more stacked than the other – or not by much at any rate. The whole thing is far more of a laid-back, stripped-down jazz affair for the big teams. Everybody keeps everybody where they can see them, nobody gets too excited and the ultimate goal doesn’t stretch too far beyond having 30 bodies in peak condition come early May.

For the lesser lights, however, the change has been a bucket of cold water right to the mush. Carlow started their league with a 16-point beating in Ennis and a 21-pointer at home to Kilkenny a week later. Westmeath have got chasings from Tipp and Galway. In each of the past last four years, the bottom team in Division 1B posted at least one win. This time around, Carlow and Westmeath both finished bottom with five defeats from five.

And yet, when you put it to Carlow manager Colm Bonnar that the change has been unkind to his charges, he is inclined to look inward above all. They head to Mullingar on Sunday for a relegation playoff and he has no hesitation in agreeing they deserve to be in it. But he won’t be blaming the format of the league for that.

“I think the way it is now is great for the teams likes us who are trying to get up to that next level,” Bonnar says. “If anything, we’ve let the form of the second tier of teams down in this league. I think it’s fair to say Laois and Westmeath have mostly held their end of it up. They’ve been scoring the sort of totals that you need to be competitive in these games and they’ve been in the melting pot in games against Limerick and Cork and all the rest of it. So I think the format works well, we’ve just not been up to the mark.

“I know people would look at us and wonder is there any point in teams like us being there, but I just think it’s been a poor league from us, that’s all. We wouldn’t have any fear of the teams around us. The game against Laois, we only lost it by a point late on. We did an awful lot right in that game and we just didn’t take our scoring opportunities. There isn’t much between us when we have everybody.”

Rubber, meet road. Carlow had a bumper year in 2019, staying up in Division 1B, drawing with Galway, relegating Offaly and spending the summer playing in the Leinster Championship. After which, St Mullin’s – with nine county panellists involved – beat Cuala in the Leinster club championship and went all the way to the final on December 1st. Carlow don’t have the numbers to tolerate the strain a year like that puts on bodies in the way other counties can.

“It’s really a numbers game,” says Bonnar. “We’ve been short seven or eight senior players through the league and for Carlow, half a team is an awful loss. When you take in the next seven behind them, you’re left very, very thin in your panel. There’s a huge gap in where our number 30-35 players are in their development, compared to where the equivalent 30-35 player is in Kilkenny or Clare or Tipperary.

“That’s what has really been the cause of our results in the league, more so than the format or anything. We’re missing James Doyle and Séamus Murphy, that’s two huge forwards to be losing. Denis Murphy has had three cruciates, Richard Kelly had a cruciate, a handful of others had bits and pieces. So look, it gives other lads a chance to come in and work and try and develop themselves and get to a higher level. But we’ve been found wanting – there’s no point saying otherwise.”

This is Bonnar’s fourth year rolling the rock up the hill with Carlow and he’s used to the swing of the pendulum by now. Last year good, this year not so good. He feels the arc of Carlow’s hurling fortunes bending towards the light, all the same. At under-21 and minor level, the Carlow panels are teeming with players, 40-plus in both cases. Yes, there have been hidings here and there. But being in the arena is the thing.

“It can’t have been enjoyable for supporters to watch us through the league,” Bonnar concedes. “But saying that, there were 3,500 down at Cullen Park for the Kilkenny game. That shows you the feeling there is for hurling in Carlow. We’d normally have a few hundred at the games if we’re in Division 2A so playing in Division One is such a boost to the profile of hurling. When you see a Kilkenny jersey and a Carlow jersey beside him, taking him on. That’s worth its weight in gold.

“I know that people will look at our results and go, ‘How can players enjoy taking those heavy beatings?’ We’ve lost a bit of momentum all right but we’re determined. We got our shot at the big boys last year in the Leinster Championship but we’re going to be highly motivated to win the Joe McDonagh. You want to play these teams, you want that higher level. You want players to see what it takes.

“There’s no question of saying to the lads, ‘Let’s relax and spend a year in Division 2A and build ourselves back up again’. They don’t want to hear that. They’re going to give it a serious lash on Sunday and they’re hugely motivated to try and stay in the division so they can develop next year. It’s what we want. If I told the players we’d be better off taking a year in Division 2A, they’d ask me to leave.”