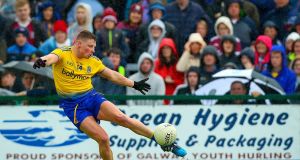 Conor Cox was impressive for Roscommon in their win over Westmeath. Photo: Inpho

The Connacht champions enjoyed a surprisingly comfortable afternoon at the office and were rarely troubled by a Westmeath side that didn’t reproduce the quality and energy of earlier rounds.

Conor Daly’s first-half goal, laid on a plate following Enda Smith’s driving run, turned out to be the match-defining score in the opening half.

That score pushed the Connacht champions 1-3 to 0-1 ahead after 21 minutes following earlier points from Cian McKeon and two from Cox. John Heslin had opened Westmeath’s account from a free in the fourth minute.

But Roscommon began to make wind advantage account, and four points without reply – a hat-trick of frees from Smith and a point from play by Cox – handed Anthony Cunningham’s men a 1-9 to 0-3 interval advantage.

Westmeath increased their scoring tally in the second half, but Roscommon always managed to keep the scoreboard ticking over to keep their opponents at arm’s length.

Enda Smith missed a penalty, although he pointed the rebound with the goal at his mercy, as scores from Niall Kilroy, Donie Smith, Ciarán Lennon and Cox put the Rossies very much in the promotion picture.