Darren Gallagher excelled for the victors in an impressive performance 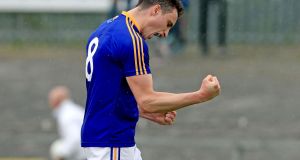 Darren Gallagher was one of the standout players as they saw off Tipperary. Photo: Donall Farmer/Inpho

Longford consolidated their place in Division 3 for next year while still keeping their promotion hopes alive with a fine win over Tipperary in Glennon Brothers Pearse Park. For Tipperary they need results in their next two games if they want to avoid relegation.

With so much to play for it was an entertaining encounter with some excellent scores and performances. For Longford their midfield maestro Darren Gallagher was fantastic once again, with Daniel Mimnagh and Oran Kenny impressing in this win. Tipp relied heavily on Conor Sweeney who had a very good game.

Longford made a great start to the game and scored their first goal in the fourth minute when Liam Connerton shot low to the net. Darren Gallagher followed up with an excellent point and Donie McElligott put Longford ahead by five in the ninth minute.

In the 19th minute Tipp cut the gap to one point with a pointed free from Conor Sweeney and then a goal after he received a pass from Steven O’Brien.

Longford scored a second goal in the 24th minute when Dessie Reynolds flicked the ball to the back of the net. Tipp replied with two points before Gallagher hit over a fantastic point. Tipp ended the half well to trail by one point at the break – 2-04 to 1-06.

The first incident of the second half was a black card to Padraic Looram in the 44th minute. Rían Brady fired over the resulting free. Brady and Paddy Collum hit over free to extend their lead to four in the 52nd minute.

The Midlanders made use of numerical advantage and in the 54th minute they grabbed their third goal of the game when Connerton passed to Oran Kenny and his powerful shot beat Evan Comerford. Gary Rogers added a point to stretch the advantage to eight points.

Tipperary were given a lifeline in the 58th minute when they were awarded a penalty; Steve O’Brien appeared to take a few too many steps but was fouled. Sweeney made no mistake with the spot-kick.

Longford responded with two points but a goal from Liam Boland left it a three-point game in stoppage time. Gallagher (free) and an excellent score from Kenny sealed the win for Longford.