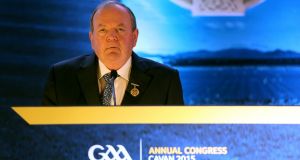 Former GAA president Liam O’Neill has described the 2014 Sky coverage deal with the association, negotiated during his term of office, as “probably the best decision” of his presidency.

Speaking on the Laois Today sports podcast, O’Neill, who served between 2012 and 2015, defended the broadcasting agreement, which proved controversial at the time and was heavily criticised by amongst others, primary rights holder RTÉ.

“A lot of people associate me with the deal, giving some of our games to Sky and some people say that was a dreadful thing. I would regard it as probably the best decision that I was involved in during the three years and the reason I say that, very simply, RTE were not doing a good job.

“We needed the finance from the deal. We needed to keep up the stakes. Sky had been in the previous two if not three negotiations and we hadn’t the guts to give it to them, and I don’t mind saying that.

“I had the discussion with Páraic (Duffy, then GAA DG) a year before it happened and I said, ‘if they’re the best and they’re offering what others can’t do, my opinion is we should do it,’ and Páraic said, ‘that’s my view as well’.”

The deal, which was the first to put championship matches on subscriber television, was partly defended as an improvement in overseas coverage for Irish people abroad and O’Neill emphasised that in his remarks on the episode.

“As well as that, the games weren’t going around the world. The GAAGO thing was negotiated as part of that package and that guaranteed that immigrants would have the games on their computers and, ironically, the GAA turned to that during the pandemic.

“Part of the deal that they gave out about in their own newsroom actually helped RTÉ fulfil its mandate (in 2020) by bringing the games not only to people abroad but people at home. I didn’t have Sky Sports. I still don’t. I’d rather go to a game and watch it so I didn’t really understand what all the fuss was about but RTÉ upped their game.”

He also pointed out that the matter had been debated at congress with 85 per cent backing the deal and that in two media rights negotiations since 2014, Sky have been retained as broadcast partners.