Colm Cavanagh keeps possibility of Tyrone return on the table 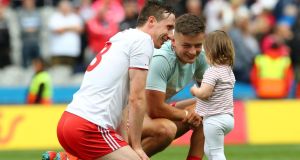 Tyrone’s Colm Cavanagh and his daughter Chloe with Michael McKernan after the All-Ireland semi-final against Dublin in August 2019. Photograph: James Crombie/Inpho

Colm Cavanagh, the last of Tyrone’s All-Ireland winners to retire, has “not ruled out” a comeback in light of the county’s appointment of new management.

The twice decorated All Star stepped down last year before the championship, which lasted just one match for the county, a narrow defeat by Donegal. A couple of weeks later, long-serving manager Mickey Harte stepped down after 18 years in charge.

He was replaced by former players Fergal Logan and Brian Dooher, who together with Peter Canavan led Tyrone to the 2015 All-Ireland title.

“Yeah, over Christmas, hearing the announcement of the new management set-up and new approach to things, definitely there was a lot of thought in terms of whether there was another run in me,” he told an online media briefing on Thursday.

“I played last year up until February, still feeling okay. I had a wee bit of trouble with my knee, and then obviously the whole Covid piece and what was happening in my personal life obviously impacted on why I stepped away.”

He said that there had been contact with the new management and although ultimately sceptical about a comeback, Cavanagh wasn’t definitive.

“I would never have completely ruled it out, but I think at this stage unless something changes in my head over the next few weeks then I’ll probably not see a return but I wouldn’t 100 per cent rule it out at this stage.”

Whereas the physical element of the challenge he believed wasn’t a problem, the motivation to go again would be taxing, which made the novelty of new management appealing.

“Part of me was thinking, I’ve played 13 years under the one regime – what is another short season if the guys would be willing, it’d be nice.

“Ultimately there’s a lot of things coming into play if it was to happen. Physically I think I’m okay, I’ve continued training on and everyone’s in the same boat doing their own personal training.

“The big part of my decision making is the mental side of things, do I have the mind-set to give that dedication? There’s a lot of good lads stepping in to refresh the panel. There’s a bit of temptation there, but look, who knows?”

Cavanagh also shed some interesting light on his decision to retire, disclosing that the coronavirus-enforced lack of crowds at matches had played a significant role.

“You know I play football for the sentimental things at the moment. You want to win of course, but playing in front of fans and that buzz and excitement and bringing family and kids and all on the pitch, all that sort of soft stuff, but I really enjoyed that piece. And that was taken away last year and it was part of the decision-making process.”

Cavanagh was speaking as a member of judging panel at the announcement of the 2020 Electric Ireland GAA Minor Special Recognition Awards, which were to recognise minors who have gone above and beyond in their community during the challenges of Covid-19 and winners include Ciarán Caulfield (Meath, Leinster), Tomás Lynch (Limerick, Munster), Michael Quinn, Josh Schnell, Shane McKenna, and Niall Óg McGuigan (Antrim, Ulster) and Jack Beirne, Andrew Jordan and Mark Rogers (Roscommon, Connacht).

Chelsea’s resurgence continues as they brush past Everton 20:29
Mullins string in fine fettle as they notch up a Leopardstown treble 20:25
Nothing of any concern found in inspection of Gordon Elliott’s stables 19:16
Reanne Evans and Ng On-yee offered professional tour cards 18:36
Leinster and Munster homing in on French opposition in Champions Cup draw 18:11
Crossword Get access to over 6,000 interactive crosswords