Brian Fenton, Ciaran Kilkenny and Cillian O’Connor on Footballer of the Year shortlist 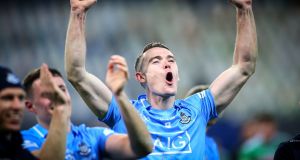 Brian Fenton is in line to win a fifth All Star. Photograph: James Crombie/Inpho

There is one less county represented than last year and another worthy 13 again for Dublin, with Cavan and Tipperary also taking a special share of nominations for the 2020 All Star football team.

Players from 10 counties are represented (one less than 2019), Dublin’s 13 nominations (the same as last year) among the 45-strong shortlist reflecting their record sixth successive All-Ireland win, with players nominated throughout every area of the pitch.

Sponsored by PwC and presented by the GAA in association with the Gaelic Players Association (GPA), beaten finalists Mayo are next with 12 contenders for the outright All Star team: it is intended that a televised presentation of the 2020 All Star awards will take place late next month, in line with Covid-19 restrictions.

After winning a first Ulster title since 1997, Cavan have been rewarded with seven nominations, including their inspirational goalkeeper Raymond Galligan, who helped seal the first round Ulster win over Monaghan, and also veteran midfielder Gearóid McKiernan. Cavan’s only previous All Star football winners were Ollie Brady (1978) and Dermot McCabe (1997).

Tipperary’s memorable march to a first Munster senior football title since 1935 is also reflected in four nominations for defenders Kevin Fahy and Bill Maher, with Colin O’Riordan among the midfield contenders and captain Conor Sweeney named among the forward contenders. Their last All Star in football was Michael Quinlivan in 2016.

Iain Corbett’s standout exploits for Limerick in their league and championship displays in 2020 is honoured with an inclusion among the 18 top defenders - a nomination for the county footballers for the first time since John Galvin in 2010. There are three nominations for Ulster finalists Donegal, two for Galway and with Armagh’s Aidan Forker, Cork midfielder Ian Maguire and Kerry attacker David Clifford also included.

Dublin’s Brian Fenton and Ciaran Kilkenny are joined by Mayo forward Cillian O’Connor in the shortlist for the Footballer of the Year Award, which will be chosen by their peers. For Fenton, the 2018 winner, it’s the chance to match Trevor Giles from Meath, the only other player to win the award twice (in 1996 and 1999), Fenton also in line to collect his fifth All Star. Last year’s footballer of the year Stephen Cluxton is in line to win his seventh award.

The vote for the Young Footballer of the Year Award will be an all-Mayo affair, with emerging stars Oisín Mullin (Kilmaine), Eoghan McLaughlin (Westport) and Tommy Conroy (the Neale) shortlisted.

“The 2020 season will go down in history for the backdrop against which it was played,” said GAA president John Horan, “and all of our players deserve great credit for producing the levels of skill and enjoyment we witnessed. Our thanks to PwC for helping ensure those heroics are recognised here.”

The nominations were chosen by a panel of Gaelic Games correspondents from across, print, radio, TV and digital media, chaired by Uachtarán CLG John Horan. The All Star nominations in hurling will be released on Saturday morning.

3 Gordon Elliott hearing to start at 9.30am on Friday

Rare display of frustration precedes fireworks for McIlroy 21:28
Andrew Coscoran and Paul Robinson into 1,500m final 21:07
Fulham own goal gives Spurs their third win in a week 20:51
Tsitsipas beats Hurkacz to keep ATP 500 title hopes alive 20:43
Another Richarlison goal wins it for Everton at West Brom 20:20
Crossword Get access to over 6,000 interactive crosswords