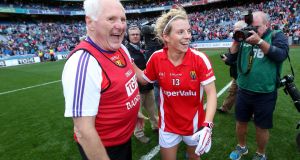 Cork manager Eamonn Ryan and Valerie Mulcahy celebrate at the end of the game after winning the 2015 All-Ireland. Photo: Ryan Byrne/Inpho

The best at their best make it all look inevitable. Team, sport, player, doesn’t matter – you watch them go about their business and they turn anticipation into acceptance. Are they standing upright? Are we sure they haven’t been hit by a bus on the way to the venue? Yes? Okay, how much are they winning by?

That was the way of it at times when you watched the Cork women’s football team under Eamonn Ryan. They won All-Irelands every way you could come up with. They atomised some teams, they ground others down, they made sure they had the ball as the clock ticked dead. Most famously, they came back from being 2-10 to 0-6 behind with 15 minutes to go in 2014 against Dublin. Precisely nobody was surprised.

Well, here’s who Cork were when Eamonn Ryan came in at the end of 2003. In the 30-year history of the women’s Munster Championship, Kerry had won 14 titles, Waterford had won 10, Tipperary had five and Clare had one. Not only had Cork never won a single provincial crown, their average margin of defeat in the seven finals they’d been to was a shade over 13 points.

Cork panels often met for the first time in the dressing room before a championship match. The older ones would quietly ask the younger ones their names and they’d whisper their own back and roll their eyes at the shambles of it all. The kitbag in the middle of the floor would be zipped open and only then would everyone find out whether they were playing in red or white.

Thing is, they weren’t short of players. Cork had plenty of success at club and underage level but none of it amounted to a hill of beans at senior and 2003 had ended the same way as all the others – hammered by Waterford one week, pipped by Kerry the next. Season over in the space of seven days.

So there was nothing inevitable about where Ryan brought them. Nothing in their history suggested that they were about to enter a period of unbridled success. Nothing in their set-up suggested that they were about to change women’s football forever or to fundamentally transform the way women’s sport is regarded. None of that was even imaginable when he started out with them.

Juliet Murphy told a story once about the early days under their new coach. He pulled her aside in an early training session and asked her if she thought the drill they were doing was useful. Murphy was a basketball international at 17, a national champion road bowler at 20 and was managing two gyms in Cork by the age of 25. The very model of a natural born leader.

Yet nobody in Cork football had ever asked her what she thought before, about pretty much anything. Definitely not about the ins and outs of a training drill. So much so that she was lost for words initially when Ryan put it to her.

“And that’s the way he continued. Everything he did, he engaged us on it. He’d ask us for our opinion on something and we’d be nearly embarrassed to give it. If you did a skill and you did it right, he’d be there telling you how good it was. Just this constant affirmation. And we were like kids. Honestly, just like kids. Our confidence began to soar because of it.”

They loved him. He was 37 years older than the eldest of them but was always able to make a connection. He would quote a thousand different people to them, all basically preaching the same thing. It would be Marylin Monroe one week, Micheál Ó Muircheartaigh the next. But the message never strayed too far - strength in unity, excellence in simplicity, ownership.

That was the key to it all. He got a group of players to own the fortunes of the Cork women’s football team. To nurture it, to improve it, to take it on themselves. After losing to Tyrone in 2010 – jack-knifing their quest for six All-Irelands in-a-row – they had a team meeting later that winter above Larry Tompkins’ pub on the quays in Cork. Ostensibly, it was to work out where they were going to go next, who was going to stay, who had had enough.

Ryan went along but didn’t say very much. He knew – as they all knew – that a five-minute speech from him would have sorted matters in an instant. All he had to do was say it was time to get back on the horse and they’d have done it. But that wasn’t his way. It was their team and he wanted them to be the ones to decide its future.

They left Larry’s pub that night with nothing decided and everything more up in the air than before. It took a couple of weeks for them to gather up a consensus between them and to ensure that everyone came back on board. They won the next six All-Irelands on the bounce, the last of them after he’d moved on.

Eamonn Ryan’s death came last Thursday in the middle of one of the bleakest weeks anybody in Ireland can remember. The pandemic is spiralling, the Mother and Baby Homes scandal is swirling, the days are cold and wet and nights are long and wetter. The news that he was gone made everything seem that little bit less hopeful, if that was even possible.

But then you thought about the life he lived and the light he was able to shine in places where it had been such a far off thing for so very long. And you remembered most of all that nothing is inevitable. Things change. They get better.

In a grim, grey week, it was something worth holding onto.