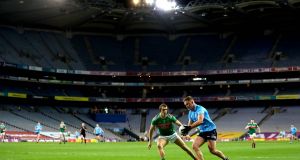 Pushing the intercounty season back to later in the year to potentially facilitate crowds is not being considered, according to the GAA. Photo: Ryan Byrne/Inpho

Amidst speculation that training for the intercounty season will not resume until March at the earliest, there is still optimism that this year’s calendar can proceed largely as planned even though the Government’s Level 5 restrictions are expected to last for another two months.

“We won’t be making a decision or even discussing it until Friday 29th,” according to GAA Head of Games Administration, Feargal McGill, “and as we’ve seen frequently before, a lot can change in a fortnight.

“There are 400,000 people who don’t need to hear from us until May - the club players. In that context the 2,000 or so in the intercounty game are the smaller part of the problem. We’re going to have a four- to six-week lead-in to actual games, anyway, so that also buys time.”

He was also adamant that there would be no flipping of the seasons to allow clubs go first and push the intercounty calendar back to the autumn, like last year, in order to benefit from potential attendances should the vaccines have had the desired effect by then.

“No. Radical changes to the fixtures calendar will not be needed until we lose four weeks. Training was supposed to resume on 15th January but we can probably hold off until mid-February before we contemplate cutting competitions or compromising on the time available to clubs.”

The intended schedule would have seen the national leagues resume in late February and with a month’s delay that would go back to late March.

Such an adjustment, even allowing for what has been a volatile situation, does appear optimistic in the light of the continuing high number of coronavirus cases, currently running at twice the rate that first triggered Level 5 restrictions back in October.

As McGill says, “If the numbers in society remain high, that makes it difficult to resume activities”.

For instance as long as the schools remain closed there is known to be little appetite within the GAA for a return to play. Overall though, he is optimistic that the championship will go ahead without much change.

“We mightn’t necessarily get every scheduled fixture completed but we’ll have a championship even if we have to compromise in some way on leagues and trim back on some of the fixtures.”

One issue that has yet to be scrutinised is the impact on the games of the new strains of coronavirus, such as the UK one, which is now present in the community and which is more infectious.

The GAA’s Covid Advisory Group will meet next week to consider the current situation. Infectious disease expert Professor Mary Horgan is a member both of this group and the National Public Health Emergency Team (Nphet).

It was her analysis of the evolving situation last year that proved most influential in the GAA’s transition from the view that no games were possible while social distancing remained a requirement to the adoption of the safe return to play protocols.

Asked if the new variants, such as that from the UK which is now established in Ireland, were a matter of concern that there was now an elevated risk of contracting coronavirus in physical contact sports, she agreed they were but said that it was too early to be definitive.

“There is a concern that it is more transmissible so any contact can lead to infection but I think it is very early in our knowledge of this new variant to be sure about how it will impact on any return to play.

“The first report of it in the UK was only on December 11th so a lot of the scientific evidence has yet to be looked at when it comes to contact sports. It will be monitored but that’s as much as can be said about potential impacts at this stage.

“Viruses and coronavirus are very good at adapting to the hurdles we put up to protect ourselves against them. This is what they do.

“We’re still seeing thousands of positive cases from all around the country so that may impact on when the players return to play. Essentially the message doesn’t change except that the public health guidelines need to be followed more stringently. The next few weeks will tell a lot.”

On the related matter of counties breaching the current prohibition on training, the GAA’s Management Committee is investigating both Cork and Down for reported recent breaches but no conclusion has yet been reached.

McGill was blunt in assessing such defiance of regulations.

“It’s the most disappointing thing I’ve seen in nearly 20 years of administration,” he said. “It shows us the governance challenges we face in the future trying to give players a better deal.

“We’re looking at meaningful close seasons and split seasons but if people can’t follow these guidelines about limiting activities in the face of a pandemic in order to protect their own players and communities, it shows the difficulties we can expect in securing compliance in a normal year.”