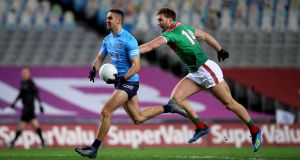 For James McCarthy, nothing summed up the weirdness of the 2020 football championship like the ending of it. On the Saturday night before Christmas, the Dubs played Mayo at five o’clock, lifted Sam around seven, sat down for a meal and a beer about half-eight and were home in their beds around midnight. No banquet, no Coppers, no Boar’s Head at dawn. No aftermath and no afterglow.

He’ll take it, obviously. Wouldn’t want to come across like he’s diminishing it. An All-Ireland is an All-Ireland, when all is said and won. But he’s also been around long enough to know that the game is about more than winning and losing. It’s about connection and brotherhood and all that good stuff too. It’s not, if it can help it, about a nice, wholesome early night.

“It’s funny,” he says now, “it’s the kind of All-Ireland that will probably be packed away and nearly forgotten about. Well, not forgotten about but it’s definitely a bit different from the others. We all split up that night and then it was Christmas week and you’re not together at all. And God knows when we will be again. Obviously you’d still talk to lads a good bit – I’d be very close with John [SMALL]and Dean [ROCK]and we’d be in touch all the time. But it’s still different. It was an All-Ireland that was there to be won and you take it for what it was.

“It’s a little bit of a lost year like that. It worked out brilliantly for us in terms of winning an All-Ireland and obviously with Ballymun as well, so I don’t mean it’s lost in that way. But you do miss that week or two after, that time to reflect. I always love that time a week or two after when I go for a pint with a couple of the lads and we find a corner of a quiet pub in Dublin somewhere and we talk out the season.

“Dissect it all, pick out the turning points, crucial moments. Talk about the young lads that came through and brought us on, like Seán Bugler and Paddy Small did this year. I always think that in every season you play, there’s a turning point and you only really realise it looking back. I love those conversations. That’s nearly what you’d miss most of all.”

And yet, surreal or not, 2020 elevated him to the ranks of the gods. Along with six of his Dublin team-mates, McCarthy won his eighth All-Ireland medal, joining Páidí Ó Sé, Pat Spillane, Mikey Sheehy, Ger Power and Ogie Moran on the golden number. The Kerry quintet had sat on top of the tree for 34 years, untouched and generally unthreatened. McCarthy will be 31 in March. It feels unlikely that he won’t have passed them by the time he’s done.

Other records too. Add his eight to his father John’s three and the McCarthys are officially the winningmost father-and-son combination in All-Ireland history. He is almost certainly the outfield player who has racked up the most All-Ireland final minutes in the history of the game too. Páidí and Mikey might just have him – records of stoppage time played in the ’70s and ’80s are impossible to track down – but one more final in his career ought to seal it for him.

McCarthy’s 11th season in a Dublin jersey was every bit as formidable as any he’d put in before. His name was to be found, inevitably, in the All Star nominations on Friday, as it has been every year since 2013. He is the only player in the country to have made the list in each of the past eight seasons. The game’s most complete combination of consistency and indestructability.

“I found last year very refreshing, to be honest with you,” he says. “The way it worked out, it just went back to basics. I really enjoyed it. Because you can’t be doing these long team meetings, it just came down to training and games. And it was less training and more games, which was brilliant. Everything was snappy and fast. There was no three-hour long meetings, it was all just enjoyment. Football and training, job done.

“You came in, did your session, grabbed your food and went. Obviously, you missed a bit by not being able to sit down with the lads and have a laugh. But from a football point of view, it was great. Over the years, you could end up sitting there for hours doing analysis and so you’d be happy enough not to have to.

“I think as well it meant we focused a lot more on ourselves. If you’re sitting in a meeting for three or four hours, you can end up over-analysing the opposition. You can end up building them up or you can drill down into what they do so much that they end up getting inside your head a bit. This year, it was a lot more about how we can make incremental improvements to our own game, individually and as a team. Focusing on ourselves stood to us, I think.”

It was a theme of the year, in truth. Everything got stripped back and broken down to its essentials. For the first time in a decade, McCarthy was able to have a proper club season with Ballymun. Summer evenings in Popintree Park, no team meetings, no time-wasting. Short, sharp sessions, serious intensity, no messing about. Music to his ears.

“We would just come and train and if we had to have a talk or whatever, we did it on the pitch and then went home. You’re probably only out of the house for an hour and half altogether. It was great.”

With six Dublin panellists available to them, it was probably no great surprise that Ballymun rocked and rolled all the way to their first Dublin title since 2012. There was plenty of talk afterwards of the failure of other years being down to the county players coming back to them banjaxed but McCarthy doesn’t buy it. Not totally. Too handy an excuse, in his eyes.

“It absolutely did have an effect but I think we probably used at as too much of a crutch other years as well. There were years when we came back and didn’t perform and didn’t take enough responsibility for that.

“I think what helped far more last year was the fact that we were able to train together for three months as a full squad, uninterrupted. In the past, you would train for a month with the Ballymun in April but you would still have that focus in your mind that championship is coming up with Dublin in a few weeks. You wouldn’t have that sole focus on the club, no matter how committed you were.

“But this year, we were able to give it our full attention. I was able to be among the lads for a long time and some of them I didn’t really know that well. There were guys there who were younger and who would have only been around the last year or two and I just wouldn’t have known them really before last summer.

“Three months training together, playing matches, really getting to be a team. We got a roll. We always knew we could beat any team, it was just a matter I suppose of not talking about it but doing it. More actions than words, you know?”

Wouldn’t be a bad memoir title, if he’s ever of the mind. Bernard Brogan’s recent tome referred to McCarthy as Dublin’s “great big silverback gorilla” – in the best possible sense, of course. Other Dubs are more vocal, others more eye-catching on occasion but nobody typifies their relentlessness better than McCarthy.

In the first lockdown, he went back to the kid he was growing up. He’d work at home most days but when the weather was decent, he would take himself up to his local park with a bag of O’Neills over his shoulder. Kick a few points here and there, make a few phonecalls, kick a few, call a few, gathering his own return as he went. At the time, he didn’t know where season was headed.

Nobody did, least of all his new manager. But at the back of it all, McCarthy has seen enough and done enough to know not to panic. In a year of madness, an ability to keep the head was always going to come in handy.

“It was definitely tough going for Dessie in those early months. He was coming in to a tough act to follow, first of all. And I’d say come the middle of March, he must have been thinking, ‘What’s going on here?’ We were kind of limping along in the league.

“In fairness we weren’t getting beaten in any of the matches but we weren’t playing well, we knew that. We were stumbling along and you just knew we were kind of coasting and cruising through it a bit. And then Covid came along so it must have been tough for him.

“But I suppose we have a lot of experience built up over the years. We know what we have and where we are. Even when Tyrone beat us in the league this year, it was a bit of sickener with a goal at the end, you’re coming home from Omagh sort of wondering what’s going on. And then the season breaks because of Covid.

“We know the experience we have in the group and we kept the heads until we got a bit of momentum going. It was a mad year, with it being a winter championship and everything. you just had to keep going.”

They found their way. They always do.