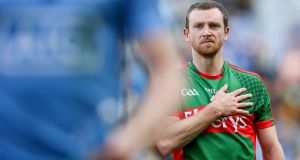 If the announcement on Saturday evening that Keith Higgins was taking his leave didn’t come as any great surprise, it was still an unwelcome reminder that Father Time is entirely lacking in mercy. It’s a material fact that Higgins will be 36 next month and yet to look at him, it’s hard to fathom a world in which he’s over 25. They didn’t call him Zippy because of the children’s TV character, after all.

Higgins arrived on the scene in Mayo’s league opener in February 2005, their first game back after taking a ferocious hammering from Kerry in the previous year’s All-Ireland final. His last appearance came in last November’s Connacht final. Across the decade and a half in between, nobody wore the Mayo jersey more.

Nobody wore any jersey more, in fact. He played in 75 championship games for Mayo and another 90 times in the league. According to Mayo’s indefatigable hurling PRO Adrian Hession, Higgins also turned out in 48 National Hurling League games and made a further 43 hurling championship appearances between Christy Ring, Nicky Rackard, Senior B and Junior. All in all, that puts him at 256 senior intercounty games. For comparison, Stephen Cluxton’s number currently stands at 217.

That number might not necessarily be done yet, either. His friend and clubmate Derek Walsh is over the county hurling team just now and Higgins was man of the match in the county final last September. It didn’t go unnoticed that when Higgins tweeted his goodbye on Saturday evening, he attached a team picture of the footballers only.

For the county’s greatest ever dual star to leave the stage without acknowledging the hurling career that made up so much of his intercounty life is unlikely to have been accidental. Don’t be surprised to find out that former Mayo footballer Keith Higgins is still current Mayo hurler Keith Higgins somewhere along the line.

And yet it says plenty about his impact as a Mayo footballer that neither his longevity nor his dual life is the first thing that springs to mind when you sit down to assess his career. He was, above all else, a pure footballing defender. He won four All Stars at corner-back - in the history of the All Stars, the only defenders to have won more were John O’Keeffe, Páidí Ó Sé and Tomás Ó Sé with five statues each. He remains the only player ever to win Young Footballer of the Year while playing in the full-back line.

Higgins was the cornerstone of the Mayo defence when the Mayo defence was the best it’s ever been. In a sport that was inexorably moving towards a zonal set-up in terms of denying the opposition space, Higgins was a vanishingly rare thing - a shut-down marker who didn’t need an extra body helping him out. It allowed Mayo to go out and face teams 15-on-15 and played a huge part in their ability to match strides with Dublin so often and for so long.

His prime attributes as a defender were speed, aggression and decision-making. He played it fast and tough but nobody ever mistook him for a hatchet man. That combination of skills - as well the fact that he was a free-scoring centre-forward in hurling - meant that different Mayo managements tried to square-peg him into round holes in the Mayo attack from time to time. But whatever his worth as an x-factor in that advanced setting, he was always needed at the back again eventually.

James Horan gave it a real shot in the 2014 league, starting Higgins at centre-forward in six games. But in two of them he ended up being repatriated to plug holes in the defence and the year ended with arguably his signature display, the All-Ireland semi-final replay duel in the sun with James O’Donoghue. O’Donoghue ended the game with 2-6 against his name but only two points of that total came from play and Higgins was a consensus candidate for Man of the Match. For those 90 minutes, the rest of the game may as well not have existed.

Like the rest of his Mayo teammates, Higgins never won his All-Ireland. He retires no less loved in his home county for the lack of one.