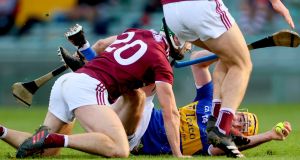 The head of the GAA’s referees development committee Willie Barrett has spoken forcefully in favour of measures to deter cynical play, which have been advanced by the standing committee on the on the playing rules (SCPR).

“I’d welcome it,” he said. “If this motion is passed it would have a big bearing. In the interests of both games, we need to address the amount of cynical fouling we’ve seen in the recent championship season – in both football and hurling.”

In the hurling championship the season’s fouls were bookended with examples, from Dublin’s Danny Sutcliffe using his hurl to trip Laois’s Paddy Purcell on the first weekend to Waterford’s Stephen Bennett being hauled down by Will O’Donoghue late in the All-Ireland final despite Limerick having it well won by then.

The proposal is to introduce the reform on a trial basis in this year’s championship, which would require a simple majority rather than the 60 per cent needed for a permanent rule change.

It would penalise in both football and hurling the foul prevention of a goal-scoring opportunity by awarding a penalty – a restorative remedy and sin-binning the offending player – a punishment.

The clár for next month’s annual congress hasn’t yet been published but the proposal is expected to be considered by delegates when the GAA’s highest decision making body, probably much reduced in numbers, meets in remote session.

Although congress 11 months ago threw out a similarly intended proposal – to extend the football sanction of a black card to hurling – by an astonishing 82 per cent – there is hope that the calculated rule breaking of the 2020 championship may have shifted opinions away from the ‘see no evil’ insistence that sank last year’s proposal.

At the weekend Munster Council chief executive Kieran Leddy raised the issue in his annual report.

“There is a debate at present as to whether cynicism exists in the game of hurling and at a level that warrants action by way of new rules,” he wrote. There can be no doubt that there were some tackles of a cynical nature in this year’s championship, and these tackles denied clear scoring opportunities.

“The number of them is irrelevant in my view. It is important that the association deals with this question now, as opposed to take a ‘wait and see’ approach.”

This attitude contrasts with the complacency of last year’s congress and the stated view that hurling hadn’t the same issues with cynical fouling as football did. “It’s not broken so why fix it?” as one delegate put it.

Pat Daly, the GAA’s director of organisational culture, planning, and development, is a veteran in the fight against indiscipline in the games and he knows the extent of the problem, as identified by the SCPR (of which he is a member) – ie that in an analysis of 20 high-profile hurling matches between 2017 and 2019 it was found that 48 per cent of fouls involved ‘cynical or disruptive’ conduct.

“If you want to stand idly by while that happens,” said Daly, “well and good but you’re going to have a crisis on your hands. It’s an experiment in one competition and if behaviours change, you’re on to something. This requires a cultural change when you look at the incidents and the rate at which they’re occurring. We need to do something about it.”

For Barrett the intention of the proposal is very simple: to discourage cynical fouling by making it more of a liability to the perpetrator than is the case at present. He also believes that the adjudication of both a goalscoring opportunity and what constitutes its cynical prevention would not pose major problems for match officials.

“I’d be hoping that teams would look at this and realise that it doesn’t pay to foul. From a refereeing point of view, it’s no different to any other big call, like a penalty. It’s very do-able.

“If the rule is there, prevention may cure the problem and these fouls won’t be seen as much. They’ll continue to happen but maybe not to the same extent. People say, ‘these things don’t happen in hurling’– well they are happening in hurling as well as football and we have to deal with it.”

He doesn’t have a problem with the proposal coming so quickly after last year’s crushing defeat for the black card motion.

“Now is an opportune time because in my opinion this will come in eventually but I’m hoping that will happen at next month’s congress and I think it will improve the quality of our games.

“We don’t want cynical fouling in our games to prevent goals being scored. To prevent it at the moment, you pull a player down, get a yellow card and concede a tap-over point.

“If you instead concede a penalty and whoever committed the foul gets 10 minutes in the sin bin, now you have to think carefully – is this foul worth that or will I play the ball and play the man fairly?

“Prevention is the best way of addressing this. If this is in the rulebook, I think teams will prepare by saying ‘why do this and suffer the consequences,’ as opposed to ‘why not?

“I think it will be passed because there is now a mood for change and I’ve seen and heard stakeholders in the game – managers, some players, the public and administrators change their minds on this. This is an opportunity.”