Dublin was always going to be home for Eric Lowndes 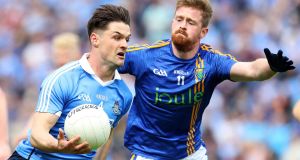 Dublin’s Eric Lowndes with Kevin Murphy of Wicklow. “It’s not that you’ve arrived once you have it [the Dublin jersey]. It’s about holding on to it as well.” Photograph: Tommy Dickson/Inphocc

Raised on songs and stories and the heroes of Meath football, Eric Lowndes has occasionally got a hard time for being a Dubliner. Both his parents are from Meath, his grandfather Paddy Maguire was famous in Meath sporting circles, and at school in St Peter’s Dunboyne some of his classmates were playing minor football for Meath while he played for Dublin.

Not that Lowndes has ever doubted his identity. Except perhaps when it came to deciding between football and hurling. Or, indeed, last summer, when it seemed most of Croke Park mistook him for Diarmuid Connolly.

He is now a familiar face on the Dublin team, one of manager Jim Gavin’s first-choice corner backs in their opening wins over Wicklow and Longford, and also set to start in Sunday’s Leinster final against Laois. At age 24, Lowndes also brings considerable experience to the position and such a steady trajectory of improvement to suggest his best days are only beginning.

In his earliest days, however, it was all about Meath.

“All my immediate family are from Meath,” he says, “and there’s some from Westmeath, it’s quite a small family. My Dad’s parents were both only children so there aren’t many Lowndes that I’m aware of.

“And Meath were really successful when I was young. I was born in 1994. Meath won an All-Ireland in 1996, in 1999, and beaten by Galway in 2001. So I was kind of raised on stories of Meath heroes from the past, even the generation before that, the 1987 and 1988 team and all that kind of stuff. Uncles and cousins and the whole lot would have been mad into it.”

His own football career began with the St Peregrines club in Clonsilla in north Dublin, and while Lowndes also played football with St Peter’s Dunboyne, Dublin was always going to be home. No matter what, it seems, his parents might have preferred.

“Well, they don’t support the Dubs anyway,” he says. “My brother Stuart is playing club football in Meath, and played O’Byrne Cup with them in 2017, 2016, and is still playing football with Dunboyne at the minute.

When breaking on to the minor teams with Dublin, Lowndes played both football and hurling – equally talented at both. In 2012, he played in both the football and minor All-Ireland finals, winning the former, losing the latter in a replay [he also has Leinster football/hurling doubles from 2011/2012]. Fate then took him down the road of football, especially after winning an All-Ireland under-21 title in 2014.

“It [hurling] might have been an option initially. I was involved with the under-21 hurlers, my first year on the senior football squad, but I picked up an injury in early 2013, and didn’t end up playing any hurling at all. But still hurling away with the club when I get a chance, or on a break, or at the end of the year playing club hurling championship and stuff, so still enjoy it.”

He has been on the fringes of the Dublin senior panel since 2013, his first year out of minor, and made his first senior appearance in 2015, still only 21, as a replacement for Jonny Cooper in the Leinster quarter-final win over Longford.

Wearing the number 12 jersey, Lowndes came in for Paul Mannion, the roar of approval clearly suggesting the crowd thought he was Connolly; Connolly, wearing number 22, later came in for Con O’Callaghan, the roar louder still.

“I actually wasn’t really aware of it,” says Lowndes. “I ran on to the pitch and thought there was a fight broken out behind me or something. I didn’t know what was going on, to be honest.

“I suppose I was just in the moment, a couple of minutes left in an All-Ireland semi-final, and I know it’s kind of cliché to say I blocked it out, but I genuinely didn’t pay much attention to it.”

Some time later, back at Scoil Bride in Blanchardstown village where he teaches, Lowndes was gently reminded of the moment when fellow teachers presented him with a mug with a picture of Connolly, which then morphs into an image of Lowndes.

None of this takes from his seriousness as a footballer: that other cliché that competition for places is what drives this Dublin team has got him this far because once Lowndes got that Dublin jersey he has worked extra hard to keep it.

“It’s not that you’ve arrived once you have it. It’s about holding on to it as well. Really driving standards to the next level as well, in terms in preparation before training and games, and making sure you’re putting yourself into a position to do yourself justice, and to hold onto it, drive it on to the next level so that you don’t always have someone chasing you. But always staying one step ahead, I suppose, is the main thing.

“And physically I’ve grown up a lot. And I suppose just continuous practice and skills of the game as well, I’ve really, really gone after them in the last few years, and it’s starting to show now.”