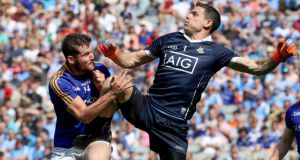 Jim Gavin is giving Dublin goalkeeper and captain Stephen Cluxton every chance of taking some part in Sunday’s Leinster football against Laois at Croke Park.

Cluxton sustained a rib injury in Dublin’s 19-point semi-final win over Longford last Sunday week, and Gavin is understandably keen to have his captain on board for Sunday, whether that be starting or on the bench. Cluxton hasn’t missed a championship game for Dublin since 2004.

“Obviously he received that bang so, he’s a little bit tender, so we’ll make that assessment over the coming days,” said Gavin, speaking at Dublin’s media briefing this morning.

Cluxton sustained the bruising to the ribs in the 22nd minute of the semi-final when Longford full-forward James McGivney fairly pole-axed Cluxton in mid-air, after the Dublin goalkeeper came out to punch a dropping ball clear: he was initially expected to be out for three to four weeks.

“He’s been out (training) with us,” added Gavin. “Stephen is a tough guy, mentally very strong, determined, so we’ll just have to see over the coming days how he progresses.”

The decision whether or not to feature him on Sunday will be left to Dublin’s medical team and Cluxton: if he feels okay he will play.

“Ah yeah very much so. He’s just sore from the bang. I’ll leave all those assessments to the medical team and the player. Ultimately it’s a player’s call, to say whether he’s available for selection. So I’ll talk to them over the coming hours and days and we’ll see how that goes out.”

His experience going back to 2004 would clearly be missed: “Is it that long, yeah? Yeah well as I said he’s a very resilient man.”

McGivney was sent off for his over-enthusiasm – while Cluxton was immediately replaced by Evan Comerford. It would be a first start for Comerford should Cluxton miss out. For Comerford, from Ballymun Kickhams, it turned out he hadn’t a single save to make against a Longford team by then down to 14 men.

“Evan would have played obviously two league games as well this year, did very, very well. But yeah he’s (Cluxton) been consistently there and that’s a testament to his determination for his sport, he’s a great passion for it and that’s very apparent when you’re around him, each time you train with the team, he’s a great leader. So but as I said we’ll give him every chance and see how it is.”

Whether or not he plays on Sunday, Cluxton will be back between the posts in time for the Super-8s, which begin on July 14th/15th, should of course Dublin get that far.

Dublin will be seeking their 13th Leinster football title in 14 years on Sunday week, Laois only their second in 72 years. Laois defender and captain Stephen Attride will definitely miss the Croke Park showdown after sustaining a double fracture to his skull in their semi-final win over Carlow.