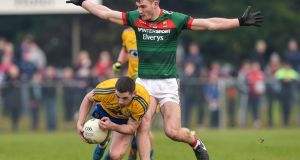 Fintan Cregg: possesses the athleticism and pace to track roving half forwards, which seems to be the point of selecting him at centre half back. Photograph: Tom Beary/Inpho

Cregg has made 16 championship appearances for Roscommon, and in scoring 1-15 (0-7f) in those encounters he has predominantly lined out at wing forward, as well as featuring in the inside line and at midfield, often rotating between the two for his club side.

It was his excellent performances for Elphin which resulted in the 30-year-old being brought back into the panel in 2016, seven years after his last Championship appearance for the Rossies.

Wearing number 12 on his back he played at centre back against Leitrim in the Connacht semi-final, man marking their talisman Emlyn Mulligan. The full-forward on the 2006 All-Ireland-winning minor team, he has been named in the six jersey for this weekend’s clash with Galway, with a similar tracking job expected of him.

Roscommon have a history of trying to convert attackers into centre backs. The most notable of which resulted in Francie Grehan winning an All Star in the position in 2001. A silky corner forward who bulked up and moved out to the half-forward line where he enjoyed getting his hands dirty and pulling the strings. John Tobin’s decision to deploy him at six was a controversial, but ultimately a validated one as he inspired the team to the Connacht championship that summer.

He possesses the athleticism and pace to track roving half forwards, which seems to be the point

Since Grehan hung up his boots, prematurely, in 2005, Roscommon have struggled to fill the position. Even before his retirement they had moved him up to the half-forward line and were back experimenting at the centre of their defence.

During that time Gary Cox and David Keenan have dropped back from the forwards, while outside of the championship the likes of Enda Kenny, Cathal Cregg and more recently Ultan Harney have been temporarily converted.

Harney – a half-forward or midfielder – was supposed to be the solution this season after Sean Mullooly’s decision to take a year out. Another left field solution, but Harney would be starting on Sunday only for an injury setback in the build-up to the Leitrim match.

Cregg however is a particularly unusual replacement. While he has a feisty streak in him and a good appetite for work, he’s a player who thrives on the open spaces, the loose, and is always looking to get beyond the play and kickpass or wind up a shot.

Nevertheless he possesses the athleticism and pace to track roving half forwards, which seems to be the point. And his go-forward ball suits Roscommon’s quick counter-attacking game.

Cregg held Mulligan scoreless from play, the Leitrim centre forward took three shots (two of which dropped short) and while he had 34 involvements in the play he made very little impact.

Cregg meanwhile scored a point, directly assisted a point, had 41 involvements, made two interceptions and won one breaking ball. While he was tested very little in a game Roscommon won by 14 points, he was able to stay with Mulligan, reducing the easy ball. And he forced Leitrim’s best attacker to think about following him too, which more often than not he didn’t do.

This was Mulligan’s first championship game since his cruciate ligament injury return, and he only played one league match in 2018. But as far as Cregg was concerned, he did all he could. So far so good in his new position. If given the same task on Sunday though, he’ll find things amplified a notch or three. If he repeats the trick against the likes of Shane Walsh it'll prove one of the masterstrokes of the summer.

Kevin McStay’s defensive match-ups were one of the keys to their surprise victory against the Tribesmen last year. John McManus moved out from full back to mark Tom Flynn, Niall McInerney did as well as anyone has on Damien Comer. David Murray took Michael Daly. It all worked a treat, and again in the drawn match against Mayo.

If Cregg lines out as selected and expected he will likely be marking one of Walsh, Eamon Branigan or Johnny Heaney. Galway were without Ciarán Duggan and Paul Conroy in their semi-final against Sligo, but that trio started in and scored 0-9 from the Galway half-forward line. A line which offers Rolls Royce pace, and carries the team’s main scoring threat.

That half forward-line have between them managed 2-36 from play so far in 2018 (league and championship). That’s a point more than the Galway full forward line which started (McHugh, Comer, Burke) have amassed – they’ve scored 5-26.

Damien Comer has 3-18 from play, Brannigan 1-13, Walsh has 0-13, and Heaney 1-10. Galway have plenty of ball-playing big men around the middle but the key for them is to get the ball to those dangerous forwards as soon as possible.

For all their defensive systems, Galway’s fullback line struggled even more than their attack did against Roscommon in last year’s Connacht final. Roscommon will counter at pace and kick the ball to their inside line, unlike Mayo and Sligo who both prefer to run the ball and take less chances.

Sligo were badly beaten by Galway, but of the 1-12 they did score, their build-up play amounted to an average of just 11 seconds per score. For those 13 scores, they averaged just two passes from when they crossed the halfway line or secured the ball, to registering a score. The rest of the time they overelaborated and ran into Galway’s grateful defensive system.

For Roscommon it’s a case of same again, as was the scenario when Galway beat Mayo in May. Neither team has tactically changed dramatically over the past 12 months, so bring the same things to the table as last year. Pressurise the Galway kickout, and break even at midfield. Leitrim managed five marks from their midfielders last time out (despite Cathal Compton impressing).

Quick ball into the full forward line, and get the match-ups right in defence. Roscommon held the Galway forward-line to 0-5 from play last year, Galway’s joint lowest total under Kevin Walsh’s tenure. Their forwards’ average championship contribution in the last two years, minus that game, is 1-11.

McStay rolled the dice for last year's quarter-final replay hammering by Mayo, deciding to finish with Cregg and team captain Ciaran Murtagh rather than start them. Cregg and co will be hoping for a better return from this year's risk as Roscommon must again get their defensive match-ups spot on to upset the odds once more.

Michael Walker: Carrying space and the benefits of learning to stand still 08:00
Matt Williams: We all need a bit of Bud Maher’s resilience right now 07:00
Ian McKinley: ‘You do take for granted the simple things in life’ 07:00
Reality Bites – Tales from the new normal: Caitríona Cormican 06:00
Nicholas Quinn: ‘Swimming became how I dealt with grief’ 06:00
Crossword Get access to over 6,000 interactive crosswords