That Limerick point and the summer of ’96 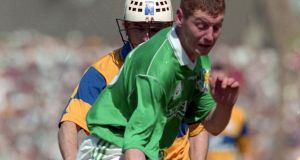 “Mere fans and enjoyers and chroniclers have the memory of That Point: Mackey has his stand; very shortly, Power shall have his monument; Carey has That Point. The greatest winner ever scored.”

Renowned hurling writer Kevin Cashman typically turned the salient details of an extraordinary match into almost an aphorism. (The monument mentioned was the statue to Limerick hurler Jackie Power in Annacotty, which had just been commissioned in 1996.)

The match in question took place on this day 22 years ago. Clare went to the Gaelic Grounds as Munster and All-Ireland champions and by the time they left hours later, the titles were also gone and furthermore, by the abrupt protocols of the time their summer was over half way through June.

Despite being the better team in many respects, Clare failed to put away Limerick, who stunned them with the last four points of the match in the 67th, 70th and two in the 71st minutes. It was the winning score from captain, Ciarán Carey that most captured the imagination.

Watch it on YouTube: catching the puck-out from Barry Foley’s equaliser, 1-12 to 0-15, Carey sets off on a run. As he gets closer, he turns and, glimpsing Clare centrefielder Fergal Hegarty in hot pursuit, swerves to the right and his pursuer loses his footing. Now in the clear, Carey hits the ball off his right - “on my so-called weak side!” – from 40 metres and over it flies to win the match 1-13 to 0-15.

In March of this year, the score was chosen in a poll conducted by the Limerick Leader as Limerick’s top sporting moment, coming in ahead of Sam Lynch’s 2001 World Rowing Championship gold medal and Munster’s defeat of the All Blacks in 1978.

Initially the most memorable thing about this day 22 years ago was the heat, recorded at the time as 23 degrees – not sub-Saharan but not exactly routine for Limerick. It was brilliant, sunny weather and huge crowds milled around the Ennis Road for the Munster semi-final.

Carey remembers it as the initial reference point of the occasion.

“Just like last week the sun was splitting the rocks and that’s my first memory of it;” he says, “it was a belting warm day.”

For Clare, it was in those pre-qualifier days so a first and only defence of their All-Ireland. Captain, Anthony Daly recalls in his autobiography: “The most memorable match I ever played was a game we lost.”

He also remembers the electricity of the occasion and how manager Ger Loughnane brought up comments by his Limerick counterpart Tom Ryan that they had been ‘timbered’ in the previous year’s Munster final.

“Before we left the dressingroom,” Daly writes, “Loughnane held up a Clare jersey and spoke about how Tom Ryan had disrespected it. The hairs were standing on the back of my neck like spikes. The atmosphere was like nothing I’d experienced before. The heat was ridiculous. The pitch was like a cauldron.”

Clare’s problem on the day was not translating their superiority into scores. They conceded a 27th-minute goal to Gary Kirby but pulled it back and in the second half began to get on top. They couldn’t however push out a three-point lead – established by the 57th minute – after which they didn’t score at all.

Limerick gradually came back into it through replacements, especially Barry Foley, who scored twice, including the equaliser, which shook the Gaelic Grounds. Carey had been switched out for the fateful finale.

“I started the game at centre back,” he says, “but when I caught the ball at that particular stage I was probably after moving out midfield – realistically I’d no business there if I hadn’t been moved!

“I put the head down and away I went. I was probably hoping for an oul’ free but the longer it went on, the more it opened up for me – opened up and opened up and I had to think on my feet, change tack as the opportunity presented itself.”

The match wasn’t the best exhibition of hurling ever but it may have been the most dramatic.

Referee Willie Barrett remembers it as “a well-contested game: tough and hard but very fair,” – a recollection backed up by the fact that it was all of five minutes before the first free was awarded.

Clare full back Brian Lohan burnished his already shining reputation on the day, setting an All Star standard in one match. Limerick manager Ryan was generous afterwards.

“I’ve never seen a full back to play like Lohan. Outstanding. In my book, Brian Lohan was man of the match.”

Carey accepts that, overall, they may have been fortunate.

“It was a typical Clare-Limerick. They were unlucky to lose and likewise Limerick might have been on the day but I think Clare possibly shaded it for an hour until we put in a bit of a rally. Hurling-wise Clare might have been a bit ahead but our work-level was extremely high and kept us in the game.”

Ruefully, though, he knows it was a decade in which his team came desperately close in two All-Ireland finals, 1994 against Offaly and later in ’96 when losing to 14-man Wexford. Each time, Clare came along the following year and won the MacCarthy Cup.

“We underachieved,” he says. “It’s a thin line between winning and losing but we would have seen ourselves as just strong as Clare.”

And That Point – do memories fade?

“There would be certain incidents in my career that would be a blur, points I scored here and there that I wouldn’t have a memory of but that I would remember.”