Dublin likely to prove too stiff a test for improving Meath 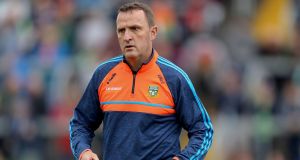 Meath manager Andy McEntee has surely noted how a slow start by Kildare saw them trailing by 0-1 to 0-7 with less than quarter of an hour up. Photograph: Bryan Keane/Inpho

The usual, faintly dismal statistics of hot favouritism trail this fixture – prohibitive odds, ever expanding title sequences – but this is actually a big opportunity for Meath to maintain the positive trajectory of this season.

They’re not expected to win and in seven championships in the Jim Gavin era, Dublin’s Leinster opponents have managed only twice to restrict their losses to single digits but the challengers have some momentum.

Meath’s promotion to Division One was marked by impressive improvements under the guidance of the McEntees and well-regarded coach Colm Nally. Defensively they’ve been tighter, in the league conceding an average of four points fewer per match than in 2018. In their three championship matches to date, they have been averaging just over 11 points against, which is on a par with Dublin’s 10.5.

They have been tested in their matches, having to scramble to beat Offaly and (briefly) losing early initiative against Carlow before taking their time to tuck away Laois. But there has been energy, purpose and good work rate.

So far, so good but the team’s displays have also been marked by very slow starts and whereas they weathered them well, Andy McEntee has surely noted how a similar opening by Kildare saw them trailing by 0-1 to 0-7 with less than quarter of an hour gone.

You’d expect that Meath will be fired up to take this on from the start. The semi-final demonstrated that they can threaten from a variety of sources – Donal Keogan’s counter-attacking, Bryan Menton’s gallops from centrefield and the forward structure provided by Cillian O’Sullivan’s orchestration, Michael Newman’s probing and the marksmanship of rookie James Conlon.

Pulling it all together against Dublin is a stiff task. There won’t be the same space or time to build from the back and any uncertainty in defence will be punished to a far greater extent than previously.

There’s talk of Dean Rock being back in contention although Cormac Costello has been flourishing in his absence but either way the Dublin forwards have been weaving menace freely. At times the defence can look at least semi-permeable and that will need to be monitored but even a decent Meath display is unlikely to push this all the way.