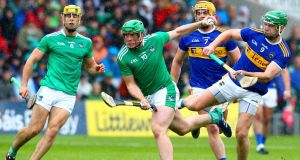 During the Tipp-Limerick game, with neither of them going at full throttle, you could see they were starting to get on each other’s nerves. Photograph: Ken Sutton/Inpho

Halfway through the All-Ireland final in 2009, a ball was sprayed into the corner where the Cusack Stand and Hill 16 meet. Eoin Kelly went chasing the ball down and as it trickled out over the sideline, I let a loose flick of my hurl across his side. It was a quick snig and it connected.

Eoin turned and gave me a steely look. He stared me right down and let off a few verbals to go along for good measure. Just to let me know he was not having it. I expected he wouldn’t take any crap from me. He had caught me with a nice clip under a high ball moments before so this was an evening-up of the scores.

We were at each other’s throats from early doors in the game, digging and nudging away but more verbals than anything. We were like two cranky auld wans in a coffee shop arguing over who was paying, constantly trying to outdo each other and get the advantage over the other person, plenty of chat, plenty of needle.

“Is that a forward warming up over there, Eoin? Must be coming on for you. Sure I’ll catch you in the bar for a drink after, yeah?”

“Where were you for that one, Jackie? I’ll slow up the next time and give you a better look at it.”

A bit of context is only fair here. We went tit-for-tat with each other that day but we loved it. Eoin and I went back a long way. We soldiered together for St Kieran’s college and again in Limerick IT. We had too much respect for each other to get personal or nasty about it but knowing each other so well added a lot more spice to it.

He was one of the best forwards ever to play the game and it was my job to find a way to stop him. I was trying anything and everything I could to put him off but the problem with Eoin was he could dance any way you wanted. That’s what he was saying in that look after I gave him the flick of the hurl.

The hurling world is small and familiarity can breed contempt. It definitely did for a while with us and Tipperary and you’d have battles going on all over the place in those games. It struck me over the weekend that because there are so many more games now under the new structure, you’re going to have these repeated clashes again and again.

Tipperary and Limerick have at least one more game to play against each other and possibly two if they both stay alive to the All-Ireland final. You can say the same for Kilkenny and Wexford, even though it’s less likely they’ll both still be going in mid-August. Cork could find themselves playing Limerick for the fourth time in two seasons at some stage – they had only played each other four times in 12 years before 2018!

When you have more games but still the same amount of teams, the result is stoking the fires between all these sides harder and more often than before.

You could see from both games last weekend that there was an edge to them. Even the Tipp-Limerick game, with neither of them going at full throttle, you could see they were starting to get on each other’s nerves.

Kyle Hayes and Paudie Maher were laying into each other, not backing down for a minute. The more times you meet, the more history there is, the more scores there are to settle, the more hurt, the more irritation, the more motivation. Add it all up and the real winners are the spectators.

So with six teams left – and with all due respect to McDonagh Cup finalists Laois and Westmeath – there is a bit of time and space to sit down and assess where the contenders find themselves.

Everything they do this week and onwards will be filtered through two questions. (1) What did they get out of the round-robin series? (2) What do they need to work on from here on out?

(1) What did they get out of the round-robin?

They dispelled a few myths, for a start. Nobody is calling them an ageing team, nobody is saying they’ve gone stale, nobody’s talking about their poor league. Their forwards are purring; Noel McGrath’s relocation to midfield has rejuvenated him and they’re putting up big scores in every game. Apart from the injuries to Bonner Maher and Cathal Barrett, they have seen no downside so far.

Very little. You’d be nit-picking, really. With Bonner gone, it puts a good bit of pressure on Dan McCormack now to fill that ball-winning, worker role in the forwards. The only thing we don’t know for sure about Tipp is how they will carry the favourite’s tag into the All-Ireland series. The last time they were riding this high was midway through the league in 2017 when they seemed to be doing everything right as reigning All-Ireland champions and we know how that turned out. Everything from here on out is a test of attitude.

They’re in the Munster final and they have 70 minutes to go and win the one cup a lot of them are missing. So in a way, it’s job done. But what they got most of all was a rude awakening. Losing to Cork was a kick in the backside at the best possible time – early on, with no major consequence. Their response against Waterford and Clare showed that they’re still a really good team. As All-Ireland champions, they didn’t need much more than that.

Bringing everything together for a major performance in the Munster final. Going into the All-Ireland series with three defeats wouldn’t be great. As well as that, they don’t need the psychological thing of being beaten twice by Tipperary when they might have to meet them again. When they play as if everything is on the line, they’re contenders. Time to prove it.

They’ve stumbled into their best team. Mark Ellis at six was clearly never the plan but he’s flying it there. Alan Cadogan had to return earlier than expected but now he’s back to his best. Aidan Walsh is working out as a ball-winner and Patrick Horgan is his brilliant self. And who would have thought they’d have the luxury of starting Conor Lehane on the bench? Also, coming third is a nice little prize. They could be dangerous.

Consistency is obviously a problem. Disastrous against Tipp, brilliant against Limerick, laboured against Waterford, very poor again against Clare. They can’t afford ups and downs the rest of the way. Specifically, they have issues in the full-back line when Eoin Cadogan gets pulled away from the square.

Considering their injury-list at the start of it, making a Leinster final is all they would have wanted and maybe better than they could have hoped for. Eoin Murphy is back, Cillian Buckley and Walter Walsh didn’t have great games last weekend but they got minutes into their legs. James Maher, Richie Hogan, Conor Delaney – all these lads are finding their way back.

They still need a broader scoring base to help TJ Reid out. Matthew O’Hanlon did well on him on Saturday night and held him scoreless from play. Adrian Mullen scoring 1-3 is a good step forward but it was absolutely needed, otherwise Kilkenny would have been in big trouble. In the latter stages of the championship, it’s even more likely TJ will be curbed. The scores have to come from somewhere.

You can’t argue with an unbeaten team. They have become so hard to beat under Davy and it’s clear for all to see that everyone is playing for him and for each other. They will go to a Leinster final now with a huge chance. Getting Liam Óg McGovern back in such good form has been a huge plus.

They could do with some variation up front. Wexford are what they are – Davy’s not going to pull a rabbit from a hat between now and the All-Ireland series. So it’s great that they can get four points a game from Diarmuid O’Keeffe in midfield but they need more of that in the forwards as well. Being hard to beat will only get you so far – eventually, you have to be able to put up big totals to beat the serious contenders.

For a team that was in such disarray a couple of years ago, they ooze leadership now. Eamonn Dillon, Conal Keaney and Liam Rushe in the forwards, Chris Crummey, Sean Moran, Eoghan O’Donnell in defence. They possibly have the best six backs in the country and definitely have the best half-back line.

Now is the time for more of the fringe players to make a name for themselves. Great and all as it was to see Conal Keaney being such a warrior the last day, how often can they rely on that at his age? Dublin need a plan for the day when he isn’t such an influence on the game. Two of their three goals against Galway came from Crummey gambling on a run from the half-back line. Again, great – but the next big team they play will be wise to it.