Damaged Mayo head to Newry on the outside track 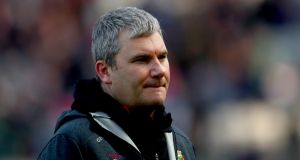 James Horan: Mayo manager led his side to the Allianz Football League title and will expect a sustained championship challenge. Photograph: James Crombie/Inpho

Much of the focus of the weekend’s qualifier round two falls on the big Ulster clash between Armagh and Monaghan but Mayo, who have reached All-Ireland finals twice in the past three seasons coming along the outside track are facing a potentially troublesome visit to Newry on Saturday evening to play Down.

The teams have come here along different routes with Down having won a first round match a fortnight ago whereas Mayo have had to wait in the wings for four weeks because their defeat came in a provincial semi-final. Their qualifier campaign begins in round two.

In 12 of the 18 years that this format has been operative, Mayo have reached the last eight of the All-Ireland – eight times as Connacht champions and four through the qualifiers – whereas Down have only managed it twice, in 2010 and ’12.

As a county that has reached only two provincial finals, Down have spent a lot of time in the qualifiers in the past 19 years for a moderate record of just breaking even: losing 14 and winning 15 of 29 matches.

Mayo’s breakdown is better with fewer matches reflecting their provincial success: winning 13 out of 19 and losing the rest.

This weekend Mayo are the more damaged team, having lost surprisingly at home to Roscommon, who then backed up the performance by winning Connacht. As league winners in the first year of James Horan’s second tour of duty, they looked to be on course to resume winning ways in the province, whose title they haven’t won since 2015.

Down lost in extra time to an Armagh side that then took Ulster finalists Cavan to a replay so by association, Paddy Tally’s team can be encouraged.

Qualifier statistics aren’t however so positive. Only two of Mayo’s qualifier defeats, against Longford in 2010 and last year’s controversial fixture in Newbridge, have actually been in away fixtures whereas more than a third of Down’s defeats in the series, five out of 14, have come in Newry.

Although they narrowly failed to get out of Division Three, Down are well organised and are managed by Paddy Tally, who when working with Galway manager Kevin Walsh last year, helped to plot the downfall of Mayo in Connacht.

In the first year of the qualifiers in 2001, John O’Mahony became the first manager to exploit the second chance when taking Galway to that year’s All-Ireland. He went on to have a second spell with his own county, Mayo, and experienced the other side of the qualifiers when losing to Derry and Longford in 2007 and 2010.

He sees danger and opportunity for the county this weekend.

“Saturday is a tricky draw for Mayo but the positive is that is if they come out of it with a win, they have good momentum going forward. Winning an easier match doesn’t have the same effect.”

He also makes the point that for a team knocked out of the championship, recovery isn’t guaranteed and he recalls the Galway situation 19 years ago when, like Mayo, they had been dumped out of Connacht by Roscommon.

“It’s always a crisis of sorts. In retrospect, people can gloss over it but when a team loses – particularly unexpectedly – in a provincial championship there are always problems and questions being asked. I remember not being sure how we’d react to having to regroup and play again – the qualifiers had only been introduced that year. It can go the other way and I had enough experience of that later!”

1 Ken Early: Despite coronavirus, Premier League season must be finished if at all possible
2 Summer tours next in line for postponement as rugby assesses options
3 Favourite sporting moment? It’s a bit like choosing your favourite child . . .
4 ‘Magnificent’ Conor Connelly remembered after sudden death
5 My favourite sporting moment: When Zidane glided through Brazil in 2006
Real news has value SUBSCRIBE

Harry Kane: I won’t stay at Tottenham 'for the sake of it’ 07:13
Competitive instinct will ensure sport returns as it always was 06:30
Ken Early: Despite coronavirus, Premier League season must be finished if at all possible 06:00
Summer tours next in line for postponement as rugby assesses options 05:00
Favourite sporting moment? It’s a bit like choosing your favourite child . . . 01:00
Here is your handy guide to sport on television this week