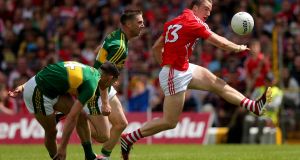 Cork’s Colm O’Neill in action against Kerry during the 2015 Munster final at Killarney. “I’d hope that they go after Kerry, go for the jugular.”  Photograph: Ryan Byrne/Inpho

Colm O’Neill should be the last person to feel any great positivity towards Cork football right now. There is no denying their sad and lowly descent and O’Neill shared the journey every step of the way.

His last appearance was in the 17-point defeat to Kerry a year ago, still only 29, coming off the bench in the Munster final at Páirc Uí Chaoimh when the result was already beyond repair, before the toll of not one but three cruciate ligament tears forced his early retirement.

There were better days – the 2010 All-Ireland win, his All Star in 2012 and when O’Neill started out Kerry were properly close rivals.

However following that demoralising defeat last summer to the Kingdom, Cork’s immediate exit to Tyrone in the round four qualifiers was equally limp.

Since then the Rebels, despite a win in Armagh on the final day of action, have sunk to the fresh low of Division Three. Everything about this Saturday’s Munster final back at Páirc Uí Chaoimh once again points to another Kerry victory.

Only for O’Neill, the positivity comes from within and is not entirely without grounds. Cork beat four-time All-Ireland champions Dublin in a recent challenge game, and even if that counts for nothing, Cork manager Ronan McCarthy has named an unchanged team which beat Limerick by 21 points in their semi-final. Only six of those players started against Kerry last year.

O’Neill has also put some money where his mouth is, coming on board with the Cork under-20 football management this year in the hope and belief things are about to get better. None of that is saying Cork will beat Kerry on Saturday, but if they go after the game they do have a chance.

“I haven’t been involved since last year, but I’d be a bit more confident this year,” says O’Neill.

“I was at the Limerick match, and I think the way Cork played, they were feeling sharp, they didn’t sit back the way they had done in a couple league matches, they actually went after Limerick. If you sit back and draw Kerry onto you, with the forwards they have they’re going to punish you, so I’d hope that they go after Kerry, go for the jugular.

“I think Cork have a stronger panel as well this year, I’m still friends with a good few of the lads on the panel, training has been going well and they’ve had some good results in challenge games. I’m not sure how convincing Kerry were against Clare either.

“And I’m getting that small bit of a sense from people I’m chatting to in the street and things. I definitely think there’s belief in the squad. I definitely do think they’re capable of turning them over.”

A decade ago he first announced his talent when captaining the then Cork under-21 team to the All-Ireland, having also won in 2007, also earning himself the Hero of the Future award. He doesn’t turn 31 until September, but even before the Kerry defeat last year, he sensed something wasn’t right.

“In the Munster semi-final, against Tipp I jarred it again, knew it wasn’t the cruciate, but knew there was some damage. I went for a scan, and there was almost no cartilage left.

“I got back to make the panel, came on with 10 minutes to go, then the following Thursday, before playing Tyrone, went flat out and felt it again, and knew then that something definitely wasn’t right I called the physio as well, met him on the Tuesday, and he asked do I want his advice? I said yeah, and he said I’d call it a day.

“For day to day things I’m fine, and I’m actually playing in goal with my club, the junior footballers, so I can run in a straight line. It’s pivoting that’s the problem. Realistically in 30, 40 years’ time you might need a knee replacement. But if I go back now, hammer that, that would just be bringing it forward and forward.

“I think the last cruciate was [the one]. I always try to keep a positive spin, but two were on the right, one of the left, and the problem with the cartilage was on the left as well. It is what it is, but I look back with more positives than negatives, obviously I had a lot of serious injuries but still happy with how it went.”

A call from Keith Ricken, Cork’s under-20 manager, inviting him in as a selector was perhaps the bridge he needed: “If you told me this time last year that I’d be involved with Cork management I’d have laughed. It came out of nothing really.

“Retiring last year, after such a defeat, probably made it a bit harder really, because I’ve had great times with the Cork team, it was at a low time at the end of last year.”