Dublin’s Ground Zero: the calamity that helped shape a dynasty 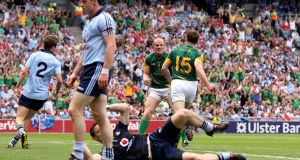 It’s not just Dublin’s last defeat in the province or even just their only one in 15 years but, appropriate to its rarity value, it hit like a meteorite. In the current era of the county chasing history and football pathologists declaring the Leinster championship dead for want of a pulse, it’s difficult to remember that in the genesis of the current champions there were setbacks as well as progress.

Meath are the latest obstacle to Jim Gavin’s team, as in Sunday’s final they attempt to extend what is already a record sequence in the province to nine-in-a-row, which would set a new standard for any province, eclipsing Kerry’s eight successive Munster titles from 1975 to ’82.

Nine years ago, it was Meath who ended Dublin’s interest in Leinster at the semi-final stage. The teams were reasonably matched, with the champions slight favourites. What certainly wasn’t anticipated was a walloping.

To put it in context, in 100 championship and more than 200 competitive appearances Dublin goalkeeper Stephen Cluxton has conceded three goals on six occasions, three in the championship. He has never conceded four but on 27th June 2010, Meath put five past him.

Stephen Bray scored first in the 10th minute and four more were scattered throughout the second half, from Cian Ward’s spectacular shot bent through a crowded square and away from Cluxton to replacement Brian Farrell’s just minutes from the end.

Meath’s 5-9 to 0-13 winning margin has only been exceeded twice in Leinster championship history (Kildare in 1903 and Wexford in 1914). To locate the only previous 11-point margin, you’d have to go back to 1969 and another Kildare victory.

In 2010 Dublin were in the second year of Pat Gilroy’s management. The two most recent championships hadn’t been without promise but each had ended catastrophically with huge defeats by eventual champions, Tyrone and Kerry, respectively.

The former marked the end of Paul Caffrey’s management and the latter prompted Gilroy’s memorable description of his team as playing like “startled earwigs”. It also prompted a tactical re-think.

Gilroy’s coach Mickey Whelan – whose distinguished playing career ended coincidentally with the 1969 Kildare defeat – isn’t happy with the depiction of Dublin’s new departure as ‘defensive,’ preferring to see it as a ‘more fluid method of attack’ but he accepts that defence was important.

“Most victories are based on solid defence and it’s as simple as that but you have to do not only the work at the back but also build up scoring opportunities and take them.”

In 2010, after their best league campaign in more than a decade, Dublin headed for the championship in good spirits but the emphasis on defending as a unit and breaking forward as a unit led to crossed wires in relation to individual responsibilities.

In the opening round against Wexford, Dublin had been lucky to win and it took extra-time to do so. Next up, Meath were serious opposition. They had been in the All-Ireland semi-finals the previous year.

Their captain, Nigel Crawford, was the sole survivor of the team that had won Meath’s last All-Ireland in 1999. Having ruptured a disc against Offaly, he was carrying an injury but felt upbeat about the match.

“I didn’t start the game. It was a really nice day and I wasn’t fit, I wasn’t right but was doing the warm-up on the bench and remember hurting my back again so I stopped and went up to sit in the stand. At one stage in the second half, Eamonn O’Brien was calling me to warm up and I was pretending I couldn’t see him because I was so worried about going onto the pitch in my state.

“It was a transition phase for Dublin. They were moving on from the 2000s, when they hadn’t enjoyed any All-Ireland success, with a new wave of players but they hadn’t fully adapted to the new regime. There wasn’t any aura of invincibility around them at that time the way that it developed after the first All-Ireland win.

“As far as we were concerned, they were there for the taking even though we hadn’t beaten them for a while. The previous year, they’d won by two points and in 2007 it went to replay. We didn’t fear them.”

By half-time it was a well-contested match. Dublin were working harder than they had against Wexford and scores were level, 1-5 to 0-8. In the second half, however, the wheels came off.

In a sliding doors moment, Paul Flynn hit the post when Dublin trailed by three and then straight afterwards, Stephen Bray scored Meath’s third – in off the corresponding post at the other end.

The defensive system might have been just part of the overall tactical shift but it was the part that most obviously crashed nine years ago.

Writing in this newspaper, analyst John O’Keeffe observed: “The number one rule for any defender on any team is don’t expose your goalkeeper. You hold your ground! There were numerous times when Dublin’s defence didn’t hold true to this golden rule and there were even occasions when two or three of them were sucked into going for the same high ball.

“These actions showed they were uncomfortable with each other as a unit and it was a very harsh lesson for them because Meath punished them each and every time.”

Topically, the full-back line that day, Philip McMahon, Rory O’Carroll and Mick Fitzsimons all played in the semi-final win over Kildare two weeks ago – having accumulated 15 All-Ireland medals in the meantime.

“We were going through a phase,” remembers Whelan, “where we were trying to change things a little bit: be better at retaining possession, get more of the ball and move it forward more effectively.

“What had happened was that we had been winning Leinster but watching teams we had beaten, like Meath and Wexford reach All-Ireland semi-finals and get farther than we had. Whether that was our reaction to stress or pressure I’m not sure. There was no pressure in Leinster because the qualifiers were always there as a fall-back.

“We knew that if we were going to make adjustments they would have to be made in Leinster because there would be a second chance.

“What happened was inexplicable. We weren’t expecting that type of a result so we had to re-adjust. That was the early stages of the change we were trying to implement and on the day it just didn’t work out.”

For Crawford and Meath, the outcome was a pleasant vindication but didn’t come as a jolt to them.

“It was obviously a surprise because I think we hardly ever scored five goals – maybe against Antrim one year – let alone against Dublin in a Leinster semi-final. But beating them wasn’t a surprise.

“We’d got farther than them in the previous year’s All-Ireland. We had experienced players: Séamus Kenny, Stephen Bray, Anthony Moyles and exciting younger players like Graham Reilly, who’s still playing.”

The roads diverged from that point. Meath would win Leinster but in the most fraught of circumstances with a clearly invalid goal by Joe Sheridan, hurling himself over the Louth line like a rugby player.

Crawford retains the faint sense of indignation about how his team were hounded to offer a re-match in the aftermath.

“How far back to do you go to address refereeing errors? Louth got a free at one stage in the first half after Paddy Keenan had picked up the ball off the ground but the referee gave a free in, which they scored. If we accept that the decision at the end was wrong, are we allowed go back and point out that we were the victims of an injustice earlier?

“Louth hadn’t won Leinster since the 1950s but I was the only one on the pitch with a Leinster medal. Chris O’Connor had never played in a Leinster final. He said, ‘I might never play in another one’ – he never did – ‘and I might never win another. I’ve done nothing wrong. The referee has decided the result and the GAA have said within the rules that is the result so why am I giving my medal back?’”

There would be no such dilemmas for Dublin. A strong qualifier campaign saw them narrowly beaten by eventual champions Cork in the All-Ireland semi-final. A year later the Promised Land was reached after a fascinating endgame with Kerry in which they trailed by four points in the 63rd minute.

“We had to learn how to go behind in matches, not panic and believe in ourselves and win,” says Mickey Whelan of the influence of the Meath defeat. “It absolutely helped to develop the mental strength you saw in the following year’s All-Ireland. It was he winning of it – those guys didn’t throw in the towel.”

Nigel Crawford agrees that it was at this time that the Dublin genie was let out of the bottle.

“I see Pat Gilroy as being a bit like Michael Cheika in Leinster (rugby). He changed the culture but it didn’t happen overnight. It took a couple of seasons. They obviously had talented players but even in the two years before (2010) they had had traumatic defeats just like Leinster in, say, the 2006 European semi-final.

“Gilroy brought in new players and a new attitude and turned it around.”