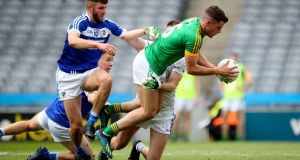 Meath’s Donal Keogan is fouled by Graham Brody of Laois and wins a penalty in the Leinster semi-final. Photograph: Ryan Byrne/Inpho

Meath’s captain and standout player Donal Keogan has made just one kickpass in play during their three championship matches so far this summer.

It’s not that Meath are negative, they’re anything but. It does tell you though the extent of their running game, and on Sunday that gameplan will face the ultimate test against Dublin in the Leinster final.

Against Offaly, Keogan played in the six position he’s lined out in. He had 25 possessions which included being fouled for a converted free, he made five interceptions or turnovers, and on four occasions went by his man. He took a quick free and kicked one pass during play. This was his only in-play kickpass so far in Championship 2019.

Unlike the Meath teams of old, Andy McEntee’s outfit are more likely to run a team into the ground than actually knock anybody into it.

Crucial to their hopes of providing what would be a seismic upset against the four-in-a-row All-Ireland champions, is the fitness of centre half back Pádraic Harnan. If the Moynalvey club man starts, he’ll certainly stand up and mix it with the Dubs.

Harnan has made just one start all year - and that came in Meath’s biggest win of their nine 2019 victories, a 15 point hammering of Carlow. With number 20 on his back, the centre back was man of the match.

In doing so he freed up Keogan to raid on from wing back. Keogan had 27 possessions, and assisted 2-1 (assists counting for the final pass before a score, or winning the free that was kicked for a score). He still made six turnovers and took his man on eight times.

Then against Laois he upped things another notch, still operating on the wing as he assisted 1-4, and scored a point himself. This was only his second kick in play this summer. And his fourth including short frees. Keogan also took his man on seven times, and made one turnover.

So this summer he has made 12 turnovers in three matches, and in his two games at wing back he has assisted 3-5 (3-6 in all his matches) and scored 0-1. As for his lack of kicking, when the Rathkenny native collects the ball he is always at full tilt. Often even ahead of the ball, overlapping beyond the defensive line.

With his pace, intent and the ease in which he carries possession, Keogan breaks the line to create for others, both to start the move or to play the final pass.

One of the best

He may be a very neat player to look at, but as a wing back he is one of the most unorthodox in the country. And one of the best. That’s why Meath need him playing that role against Dublin.

For that, they also need Harnan to be fit. He only kicked one ball from play himself in the win over Carlow. He made a thundering hit in the final quarter for one of his four turnovers and interceptions. He scored a goal, and assisted 0-2 through winning frees.

So the tactic for Meath is clear. The halfbacks aim to take the ball out of defence as quickly as possible, usually to the low lying half forwards - Cillian O’Sullivan especially. And then overlap beyond them. They will then either kick, or keep it in the hands. Along with Keogan, and Harnan, Bryan Menton and James McEntee are also direct runners who will look to go at Dublin and take them on.

These runners all tend to channel down the centre, which means goal chances when it works. But this can also make it quite easy to defend once the man on the ball is held up or dwells. This will be the major challenge for Meath on Sunday, getting the balance right between committing to take the man on - as they so love to do - and coming back out for support.

That’s where young James Conlon comes into play. The 21-year-old made his first championship start in the semi-final, after shining for St Colmcilles in the Meath club championship. He scored a goal in their All-Ireland intermediate final defeat to Westport two years ago, and five points from play as Meath beat Dublin in the Leinster minor quarter-final a few months earlier.

This summer he’s began to deliver on his underage promise - he’s scored 0-9 in two substitute appearances and one start, and is Meath’s top scoring forward from play in this Leinster campaign. In 103 minutes he’s touched the ball 31 times, and shot with 14 of those. One of the country’s most gifted young players at running angles, he comes in on the loop and is confident off either side. Conlon has slotted six off his right foot and three off his left.

Carrying much of the scoring responsibility for the Royals over the past decade has been Graham Reilly, but he is set to start Sunday’s final on the bench. If Keogan, Conlon and co can do the business - Meath will need to match Dublin’s bench into the second half. Or else be overran by fresher legs or better players.

Reilly has come on in each of Meath’s 11 matches - league and championship. Meath’s combined scoring aggregate rises from +17 to +37 after his introduction and he has scored 1-6 himself.

So beyond us remembering that they are the once mighty Meath, for any chance of winning the Royals will need this ball carrying game to click.

They need their best team out in their best positions, Conlon to come of age and Reilly to finish it all off.

The build-up for Meath’s first goal against Carlow involved one kick, four handpasses and lasted 18 seconds. Their second goal took 16 seconds and included only three passes, two with the hand. Menton’s first goal against Laois involved just one hand pass from O’Sullivan after he received a short free - from start to finish it was 11 seconds with both players skipping through tackles with ease.

No matter the speed, running through Division Three defences is a different proposition to taking on the Dubs.

But neither Meath, nor raw speed, should ever be fully written off.