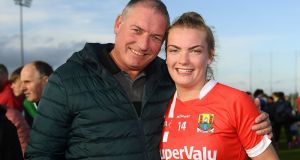 Although it’s currently World Cup season and I announced to my whole family I would be taking a month-long hiatus from family engagements, I knew it wouldn’t be long until my mother kicked me out of my woman cave/office to experience the outside world.

So, I agreed, and I swapped the killer finishing of Alex Morgan, Carli Lloyd, Wendie Renard and Vivianne Miedema for a Munster showdown between Cork and Waterford.

Waterford were on a high coming into the Munster final. They are the reigning Division Two champions, only losing two games along the way, and had already scalped Cork in Fraher Field in 2017. But in this year’s round-robin Munster championship game, Cork had humbled Waterford by 24 points.

Cork have have plucked Saoirse Noonan from the stylish soccer world. Already an FAI Continental Tyres Cup winner with Cork City and renowned for her goalscoring ability, she has managed the transition to the different challenge of ladies football impeccably.

Despite only appearing onto the scene in the Munster final in 2018 against Kerry, Noonan has racked up an impressive scoring rate. She came on that day against Kerry at half-time and, withing half an hour, scored 2-2. That day Cork fans could forsee rival teams would struggle to handle her and, so far, very few have.

Cork manager Ephie Fitzgerald utilised her well in 2018 although football fans were crying out for him to start her – after all, we all want to see the best players on the best days. But Ephie held tight and Noonan earned herself that dreaded nickname all competitors despise – super sub.

The epithet was understandable as Noonan, in six championship games, came off the bench to rack up an impressive tally of 6-11. In total, she played over 120 minutes. Although she was a sub in the All-Ireland final, she did not manage to kick a score that day but, later in the winter, it was announced she had suffered a partial tear to ligaments in her knee.

Recovery aside, it still has not stopped Noonan. In the Division One final against Galway at Parnell Park, the familiar storyline materialised again as Noonan bagged a goal after coming off the bench.

Her brilliant assist to another speedy star, Eimerr Scally, also became an online hit. Orla Finn ran at the Galway defence down the left and chipped a ball into Noonan who quickly transferred the ball into the path of the oncoming Scally. The latter popped that ball over the bar for the score of the league. Noonan is often praised for her clinical finishing but her assist that day was reminiscent of Pep Guardiola-era Barcelona.

Against Waterford at the start of this year’s championship, Noonan fulfilled the familiar role of coming off the bench and hitting one point in a landslide victory for Cork.

But, the super sub was now going to be trusted with the title of starting full forward against a Kerry side that is inconsistent at best. Noonan had already shown her dynamic movement in the inside forward line and used her soccer skills to either caress the ball past the goalkeeper, chip the keeper, or drill it hard and low, but now she has broadened her role to playmaker, assist master as well as score taker.

Before the Cork men’s footballers got their championship underway, all the talk surrounded the preceding Cork and Kerry ladies match. Noonan was starting and was now going to add another layer of competition to an already formidable full forward line. Noonan contributed 1-2 on the scoreboard that day (although she was unlucky not to have scored another goal early in the game as her shot flew narrowly wide), thus cementing her place in future starting Cork 15s.

And once again, during a week where her former soccer team-mates were focused on a World Cup and wondering when Ireland would join women’s soccer’s elite, Noonan was preparing for her second Munster final.

She went on to play a starring role against Waterford, scoring 2-3 from play to help seal a 2-14 to 0-9 win – and a 13th Munster title for Cork ladies.

In total, Noonan has scored 9 goals and 44 points in just under 300 minutes of ladies Gaelic football, which is absolutely sensational given the fact it’s only her second year as a Cork senior and also the fact that, in seven of those games, she came on as a substitute either at half-time or late into the game.

Her scoring prowess offers another layer to Cork’s attack, and with speedster Scaly growing into her role as a leader and Orla Finn’s accuracy in attack, Cork’s forward line would give any manager a headache.