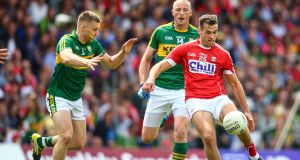 Niall Coakley started against Kerry in 2017 - it turned out to be his final Cork appearance. Photograph: Cathal Noonan/Inpho

At the beginning of the fall, back around 2013 or so, it became a source of irritation among Cork football followers when Conor Counihan started naming dummy teams. Nobody raises an eyebrow to it now, of course. Jim Gavin does it with the Dubs, so any sense of embarrassment that was ever attached has long since been peeled off.

But when Counihan did it for the Munster final six years ago, it was taken as a sign of weakness. Cork were Cork and Kerry were Kerry and all the pre-game tricking about in the world wasn’t going to change the terms of engagement very much. It was like blowing on your dice for luck – when it came down to it, who were you kidding?

Worse, the attempt at subterfuge couldn’t survive the wink and elbow language of Munster final week and everyone knew the changes long before throw-in. One of them was to bring in Noel O’Leary to play on Paul Galvin, for chrissakes. It carried all the surprise of Celtic turning up for an Old Firm game at Ibrox.

Ronan McCarthy hasn’t been a man for that kind of thing in his time with Cork. If he was ever going to do it, this would have been the week. After naming his team on Tuesday (!) night – and getting commended at Cork county board meeting on Wednesday for doing so – McCarthy has subsequently made three changes to it. And in a move virtually unheard of these days, he has actually told people about it ahead of time.

On Friday morning Cork released a fresh 15, replacing injury-hit Eoghan McSweeney, Thomas Clancy and John O’Rourke with Stephen Sherlock, Seán White and Kevin O’Driscoll. We can presume there will be no more late changes before throw-in – that would be taking the double bluff to extremes, in fairness.

Just as it would have been McSweeney’s first time playing Kerry in championship, Sherlock likewise hasn’t had the pleasure of the fixture before. In fact, it means that come seven o’clock on Saturday night, no fewer than five Cork players will be facing Kerry for the first time in championship. Sherlock, Nathan Walsh, Liam O’Donovan, Mattie Taylor and Killian O’Hanlon have a sink-or-swim night ahead of them. Live on the box too, just in case they needed any more spice in the mix.

Trace back through the sad, lamented decade that this fixture has endured and it emerges as no particular surprise that a third of the team will have changed from one year to the next. In six championship games since Cork’s last win over Kerry in 2012, they have tried 24 new players in the fixture.

Cork are always starting again. At the top and at the bottom. Éamonn Fitzmaurice faced four different managers in his six seasons on the Kerry sideline. The put-through of so many new players each year is equal parts a consequence of that lack of continuity and a contributor to it.

Players come and players go. Some hang around for a couple of seasons, others are gone before they even nail down a preferred hook in the dressing room. Niall Coakley started at corner forward against Kerry in 2017 and pointed a couple of first-half frees before being replaced at half-time by Donncha O’Connor. His first outing against Kerry thus became his last game for Cork.

Coakley was living and working in Dublin and had transferred to St Jude’s in 2015 and though the commute was no fun, he was ready and willing to make it. But it all turned to dust with indecent haste for him in 2017. After losing to Kerry, Cork went out of the championship after bringing Mayo to extra time on July 22nd. Peader Healy stepped down, replaced by McCarthy a month later. At the end of September, Coakley got the call from McCarthy telling him he wouldn’t be required to make the trip up and down anymore.

Go back further and take someone like Noel Galvin, corner back on the 2014 team. That was one of the worst days for Cork, overturned to the tune of 0-24 to 0-12 in the last game in the old Páirc Uí Chaoimh despite being well fancied going in. Galvin didn’t have a stellar day or anything – the Kerry starting forwards scored 0-18 from play between them so there was plenty of nightmare to go around the Cork defence. Yet he was a sturdy, cranky corner back of the kind Cork didn’t have in abundance. And he never played against Kerry again.

Season after season, Cork put a lie to any notion that they’re short on players. Names tumble through the teamsheets. Four different O’Driscolls played in the 2015 drawn game in Killarney – brothers Colm, Kevin and Brian of Tadhg MacCarthaighs plus Nemo Rangers wing back Barry. Four years on, only Kevin is in the 26 for tonight.

All teams refresh and rebuild. Just not all the time. The problem for successive Cork managers is that when each new batch finds itself on the end of a hiding from Kerry, the same issues arise, just with different faces and names attached. Nine years on from their All-Ireland win, ask anyone in Cork what’s missing and they all say a variation on the same thing.

Leadership. The spiky defiance of O’Leary, Graham Canty, Anthony Lynch and the rest was never replaced. The stand-out Cork display of the lost years was Alan O’Connor’s second half in the drawn Munster final in 2015. The big midfielder had been coaxed out of retirement a couple of months earlier and this was exactly why. He went around Killarney imposing himself on the then reigning All-Ireland champions. Only for Fionn Fitzgerald’s half-potshot/half-ball-into-the-square, Cork would have stopped the rot and it would have been O’Connor’s doing.

The further we get from that day, the harder it is to imagine a Cork player running a Kerry game like that. Ruiarí Deane made shapes at it last year before his black card but the collapse around him was total and his influence had ebbed by the time he walked. Ian Maguire is considered to have a bit of go about him and carried the fight for a while in the 2017 game but he was anonymous last year. James Loughrey, Mark Collins and Paul Kerrigan have been there throughout but none of them scare Kerry now – if they ever did.

It’s a lot to expect of the five newcomers to start turning the boat around but it’s to them the job falls now. A lot was thought of Sherlock as he came through with St Finbarr’s but his Cork career got off to an inauspicious start with a missed penalty on his debut against Tipperary in the 2018 league.

As for the others, we won’t know until we know. Nathan Walsh made his championship debut against Limerick and now his reward will probably be whoever Cork deem the lesser of three evils in the Kerry full-forward line. Presumably Loughrey will try to lock down David Clifford, so maybe Walsh gets Stephen O’Brien, or maybe Paul Geaney. Gulp.

One of Taylor or O’Donovan will spend his evening chasing Dara Moynihan around the place, O’Hanlon will likely have to track Jack Barry. None of this is straightforward.

Their only saving grace right now is that nothing is expected of them. Years of flux and failure has guaranteed as much.