Saturday showed the kind of assertive, self-motivated bunch of players he has taken over 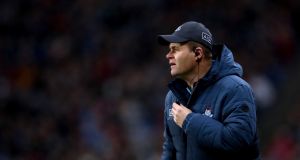 Dessie Farrell: his trickiest task will lie in assessing what changes to make and how to make them and how to bring a strident, self-possessed dressing room along with him. Photograph: James Crombie/Inpho

Among his many and various accomplishments down the years, Dessie Farrell is responsible for one of the great hangdog one-liners ever to fall from a footballer’s mouth in public.

The year was 2001 and Tommy Carr had just got the bum’s rush from the Dublin job, a mere two months after the epic draw and replay against Kerry in Thurles. He was sitting at a top table in, if memory serves, the Burlington, flanked by his selectors and Farrell and the mood in the room was country song low.

We remember that Kerry-Dublin series mainly because of Maurice Fitzgerald’s immortal sideline score of course. But lost in the mists are the chances Dublin had to win the first day, one of which fell to Farrell.

Declan Darcy had a shot blocked and Farrell nipped in to gather the break a couple of yards out, with Declan O’Keeffe prone on the ground behind him and Séamus Moynihan sitting helpless on the flat of his backside.

The amateur psychologists will be everywhere. The body language experts won’t see a poor day

There followed one of the all-time missed open goals. Say what you like about Ronny Rosenthal, he at least had to hit a moving ball on the run from 12 yards out. Farrell had the ball in his hands, both feet flat on the ground, close enough to the goal for him to reach out and touch the right-hand post. But he got under his shot and clanked it off the crossbar, immediately sinking to his knees with his hands on his head like an extra in Platoon.

Anyway, spin the tape on a couple of months and John Bailey had knifed Carr and the Dubs were in torment again, to the general glee of the rest of the country. Farrell had not only been Carr’s team captain but had gone to the previous week’s county board meeting and made a speech in the management’s defence, a heartfelt plea to delegates not to be hasty and to give him time.

Having failed in those endeavours, he was asked in the Burlo how he was taking it all.

“Right now, I feel like I’ve just hit the crossbar from two yards out,” came his replay, straight from the steps of the gallows. Ever since, it’s been hard not to have a bit of time for him.

On Saturday evening, Farrell got his first taste of what it’s going to be like at the sharpest end of the hardest days and nights of his new gig. Even when there was a clear talent gap between the two counties in the middle of the last decade, Kerry and Mayo were the only teams who refused to be beaten before they left the dressing room against Dublin. Now that gap is closing, every Dublin-Kerry game can’t help but be a gut check for both sides. League is league is league, except when they meet each other.

Afterwards on Saturday night, the Dublin team bus was sitting outside their dressing room about three-quarters of an hour after the final whistle. If you looked through the windows, you could see Stephen Cluxton and Jonny Cooper on their feet, holding court. Neither of them had been in the 26 for the game but they were there and engaged and animated nonetheless.

Now, for all we know, they could have been to the cinema together earlier in the day and were breaking down Bad Boys For Life for the rest of the bus. Clucko and JCoops, the Siskel and Ebert of the Dubs’ dressing room.

But given that this was the second league game in a row between the sides that had ended in a pawing match in the middle of the field, it’s not unreasonable to imagine they might have been talking about something to do with the crowd in the green and gold.

Farrell’s role in all of this will be scrutinised to a point far beyond analysis over the coming year. The amateur psychologists will be everywhere. The body language experts won’t see a poor day. For the want of genuine information about what has changed and what has been left the same, Farrell will be judged from afar and most of it will be only tangentially related to the reality inside the Dublin camp.

But if we can surmise that Saturday night showed him anything, it’s that he has taken over an assertive, self-motivated bunch of players who have their own habits and their own norms. They gonna do what they gonna do. That much was obvious in the way they came blazing at Kerry from the 65th minute onwards, taking complete control of the game in all the ways we’ve become used to.

The high press on Shane Ryan’s kick-out. Brian Fenton’s hand-in-the-air signal in possession after Ciarán Kilkenny had brought them level for the first time in half an hour, just as the clocked ticked into injury-time. The patience and craft of the two minutes that followed, as they pulled Kerry this way and that to eventually set Niall Scully up to put them in the lead. By Farrell’s count, they’ve had just three training sessions together and a walk-through. This was Dublin playing on muscle memory.

The point is, Dessie Farrell’s trickiest task will lie in assessing what changes to make and how to make them and how to bring a strident, self-possessed dressing room along with him.

To most other counties, these will appear to be first-world problems. Any manager that can draw with a reasonably full-strength Kerry without Cluxton, Cooper, Jack McCaffrey, Paul Mannion and Con O’Callaghan in the starting XV isn’t going to be losing a lot of sleep.

But though Farrell has the best job in football, success is not a given. Nothing is inevitable. Just because it looks like you have been presented with an open goal doesn’t mean you can’t hit the crossbar every now and then.