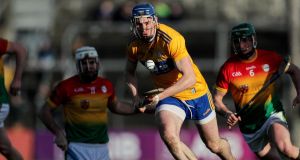 Clare’s David Fitzgerald: “We’re lucky that we got a few breaks to go our way, a few points to hold on.” Photograph: Laszlo Geczo/Inpho

On the sideline at least it turned out to be something of a muted contest as the hurling did almost all the talking in Sunday’s high-pitched showdown between Wexford and Clare.

It was a first Allianz Hurling League meeting between Wexford manager Davy Fitzgerald and his former Clare team-mate Brian Lohan, now in charge of his native county, and their Fitzgibbon Cup feud of recent years didn’t resurface to any degree as 14-man Clare held off Wexford and the second-half wind for a three-point victory.

Afterwards there was some brief comment on what was said between the two – or rather what wasn’t said.

“People can write what they want about me and Brian Lohan,” said Fitzgerald. “It doesn’t bother me in the slightest. He is who he is, and I am who I am, and that’s grand. That will never come into it with me.”

Lohan declined to go even that far. “No,” he replied, when asked was there anything said between the two.

That left the last word on the game to Clare forward David Fitzgerald – no relation, incidentally – and yet one of the main talking points after his three-point contribution from open play.

With some gentle irony Fitzgerald was first brought into the Clare senior panel in 2016 when Fitzgerald (Davy) was still in charge of his native county, departing at the end of that season, and joining Wexford in 2017.

Until this season, however, Fitzgerald was best known as a wing back, the Inagh-Kilnamona club man featuring in that position for much of 2019. Lohan has since moved him to centre forward, his three points from play and an overall combative display, to go with the 0-12 scored by Tony Kelly, one of the main differences in the end result.

“I was lucky,” said Fitzgerald. “A few balls thrown out to me, that kind of thing. We won’t get too carried away. It’s still a learning curve.

“There were times during that second half, a 15-minute period, when we struggled to get our hands on the ball. We were clinging on. A lot of bodies in the middle third. We’re lucky that we got a few breaks to go our way, a few points to hold on.

“We expected that after half time. We had that cushion, but we knew they had the wind at their backs and would come right back at us. And they did claw us back.”

Asked for his thoughts on his former manager, and if Fitzgerald’s presence on the Wexford sideline brought any extra edge to the game he said: “It does and it doesn’t. We’d all know him. He knows all of us inside out. We’d have worked with him.

“What he has done with Wexford has been outstanding. They were very unlucky not to get to an All-Ireland final last year. They’ll be there or thereabouts again this year for Championship.”

Also asked about Kelly’s contribution, Fitzgerald certainly wasn’t muted. “Outstanding. At times fans don’t realise how good he is. The way Tony is performing at the minute, every day in training he’s unmarkable. You can see that, the way he’s hurling. Long may it continue for him. It’s great.”

Lohan too was more open on his praise for Fitzgerald and Kelly. “Yeah, David works so hard and he’s so honest. He just wants to deliver for the team the whole time.

“And you see what he [Kelly] brings, when he’s going like that it’s great. But Tony knows as well this is only the beginning of February and it’s a long year yet.”

Next weekend brings the first break in the hurling league. Unbeaten Clare resume on Sunday week when they host Laois, still seeking their first win, while Wexford travel to Kilkenny, not just unbeaten but scoring 3-21 in their wins over Dublin and Carlow, leaving them with a scoring difference of +33 points.