How the friendship between Davy Fitzgerald and Brian Lohan unravelled 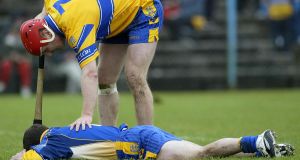 Shortly after Brian Lohan was appointed Clare manager at the end of October, a mutual friend of his and Davy Fitzgerald’s set about seeing if something could be done. It was always likely to be a fool’s errand, given the souring of relations between the pair. But if there was potential for a détente, it lay in the fact that they were going to be opposing intercounty managers now.

The hurling world is small, the elite end of it smaller still, and there are only so many Bainisteoir bibs to go around. With their teams certain to run into each other, it was going to come up and it was going to be public. The point of the intermediary was to see if a little of the poison could be drawn.

It couldn’t. Answer came there none. Three months on, Fitzgerald’s Wexford welcome Lohan’s Clare to Wexford Park on Sunday and the shoulders will be cold on all sides. The photographers will hover at the end, looking for the rare GAA handshake pantomime. In Fitzgibbon matches between LIT and UL in recent years, the pair have gone their separate ways at the final whistle without exchanging the usual pleasantries. All indications suggest they will likely do the same on Sunday.

“As you know and I know and everyone else knows, they were two great hurlers,” says Fr Harry Bohan, friend and mentor to both of them stretching back as far as anyone cares to remember. “But above and beyond that, they were and are two very, very strong personalities. They are their own men, both of them. They would make up their own minds and they would stick to it.

“I would know both of them very well and I think the world of them both. My thinking is that whatever happened between them, it had to do with the Fitzgibbon Cup and their time involved there. Both of them are winners, both of them are so competitive and both would do anything to win.”

It’s all a bit needless, all a bit petty. And nonetheless, for the rest of us peering in from the outside world, unavoidably fascinating. This isn’t just two regular Eddie Punchclocks having a falling out, after all.

Go back through the past half-century of hurling and think of goalies and their full backs and immediately you think of Davy Fitz and Lohan. In the 50-year history of the All Stars, the goalkeeper and full-back spots have gone to players from the same county nine times. Fitzgerald and Lohan are the only combination to do it twice.

“All through their hurling years, there was a bond between them,” says Fr Harry. “They were both leaders and they would both stand up for themselves but they had that bond that you need between a full back and a goalkeeper. They were a combination that worked very well together, with each other and for each other.

“But it was when they took over college teams in Limerick that the rivalry started to come between them. I don’t know what specific thing it was over, I wouldn’t have a clue. But you’re talking about two very driven men. They both wanted to win.”

Before we pull on the heavy gloves and go digging down to the roots of the issue, it should be stated that The Irish Times contacted both men for this piece to see if they had anything they wanted to say about it and both declined, politely and firmly. For his part, Lohan has resisted a few attempts to get him to open up on it, saying at a press event last May: “I don’t have anything to say about him, to be honest.”

By contrast, Fitzgerald’s side of the story is largely out there, dealt with in his book of a couple of years ago. According to the Wexford manager, the pair had been getting on well in their post-hurling lives, golfing together, putting bits of business each other’s way and so on. Right up until they came face-to-face in the Fitzgibbon Cup in 2014; Lohan as coach of UL and Fitzgerald over LIT.

In many ways, the passage in his book makes it a classic Davy Fitz tale. LIT were underdogs and Fitzgerald pulled a few tricks to blindside the fancied UL team on the day – emerging en masse from the bushes (!) onto the pitch, warming up on the side of the field where UL already had their cones laid out. Small but pointed outrages, the sort of vaudeville defiance act that has sometimes been his stock in trade. LIT won the day and, in Davy Fitz’s eyes, the end had justified the means.

“Brian never came near me afterwards,” he wrote. “I didn’t need to be told he was absolutely bulling. When the dust had settled a couple of months later (we’d lost our semi-final to Waterford it by a point), I decided to ring Lohan. Had just pulled in to the Clareabbey car park and was killing time before a meeting. The silence between us had been playing on my mind and I wanted to put an end to it.

“But it soon became clear that Brian wasn’t in any mood for a handshake and fresh start. He told me that he couldn’t accept ‘some of the stuff’ that had gone on in that quarter-final, suggesting that – in his eyes – I’d been personally responsible for the worst of it. My response was, “Brian, my job is to win for LIT. I’ve to do what I have to do, just as you have to do what you have to do for UL. You know me long enough, you know I’d do anything for you. But when we’re on opposite sides in a game, it’s war. It has to be. You need to get over this.”

Now, of course, we only have Davy’s side of the phonecall to go on here. Lohan may have had a bigger grievance than a few fast ones pulled at a Fitzgibbon match but in the absence of any enlightenment, we have to go with what we have.

One way or the other, the heat got turned distinctly higher in 2015 when Clare, with Fitzgerald at the helm, went out of the championship in early July after a wan qualifier defeat to Cork. Lohan had a go at the county board and called for a top-to-toe review, which Fitzgerald took to be a direct swipe at him and his father, long-standing county secretary Pat Fitzgerald.

Whatever the merit in Lohan’s suggestion, Davy Fitz is Davy Fitz. And he reacted accordingly. There was a phonecall, there were words, there were more words and then there was silence. Which has more or less held ever since. Fitzgerald’s book came out in 2018, detailing the whole thing as he saw it and Lohan didn’t bite when asked about it in public.

That said, he did have a small dig at that same press event last May. Having been asked several different ways about what he thought of Davy Fitz, he dead-batted everything apart from one question about the Wexford manager’s sideline persona.

“I don’t know if it’s genuine passion,” said Lohan. “We’re all passionate about the game, but we don’t . . . we show it in different ways. He has the way he does things and people have to kind of fit into that. But I think some of the antics, they’re not great.”

So here we are. A new season, on otherwise non-descript February league game in Wexford Park and a subplot that means as many eyes will be trained on what’s happening on the sideline as the action taking place on the pitch.

Sad, in a way. Compelling too, though.