Kerry smash and grab their way to late win over Galway 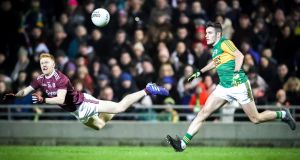 Kerry fashioned a great escape on their home patch with a late goal from Paul Geaney that turned the second half on its head.

Geaney’s goal came in the 71st minute and helped overturn what at that stage was a well deserved lead for the visitors to Austin Stack Park. For much of the second half the Tribesmen looked the more assertive and aggressive side and seemed to have the Kingdom very much on the back foot, with Geaney’s late goal the key to a smash and grab from the hosts.

“Yeah, you could say that at the end,” Kerry boss Peter Keane admitted. “But that said, we’d lots of chances and we just didn’t take them. Now, they had plenty of chances as well. I think they had six from 12 shots or something in that first half, so their kicking probably wasn’t there. We were getting there, but just not finishing it or not killing it, maybe.”

Galway’s dominance of the second half was capped by a brilliant individual goal from Shane Walsh, who spun by his marker and headed straight for goal before finishing past Shane Ryan in the Kerry goal. Walsh’s strike gave Galway a 2-10 to 0-14 lead after 58 minutes in what was a pulsating encounter in a cauldron-like atmosphere in Tralee in front of 11,117 spectators.

The loss of James O’Donoghue at half-time – he was replaced by Tommy Walsh – seemed to knock the Kingdom off kilter, and they lacked the fluency that defined their attacking play in the first half. Having wasted very few chances in the first half, Peter Keane’s men saw their scoring efficiency drop off substantially in the second period.

Indeed almost immediately after Walsh’s strike, Stephen O’Brien was nearly in for a goal of his own, but was denied by an impressive Connor Gleeson. Another Walsh point on 59 minutes seemed to have Galway in the driving seat, but a black card for Cillian McDaid on 63 minutes gave Kerry a chance to get back into the game.

It took Kerry a little while to do so, but they did eventually regain a foothold, with Geaney prompting his side from deep to decent effect. The goal when it came was out of the top drawer from Kerry, with both David Clifford and Stephen O’Brien involved in assisting the Dingle man for the all-important finish – 70 minutes gone and all square, 1-14 to 2-11.

In the frantic final few moments, Kerry had the better chances to seal the deal, with Clifford hitting a shot off the upright from distance. Walsh was alive to the possibilities and collected before assisting Killian Spillane for the winner.

It was a really tough blow for Pádraic Joyce and his men to take, having done so well for so much of the match. But Joyce’s men will rue their first-half profligacy, where they took just six of 16 chances, with the Kingdom looking wide open at times – the green and gold conceded four first-half goal chances, with the Tribesmen taking just one of those through corner-back Johnny Heaney after 17 minutes.

“We were the better team all night, but just didn’t finish, didn’t take our chances and were punished for it in the end, and that’s what happens when you’re playing top teams.”

Kerry, who were forced to start without both Tadhg Morley and Seán O’Shea, were moving very nicely in the first half, with O’Donoghue on song and back to his best (he hit two brilliant points from play) and retired at the break in front 0-10 to 1-5.

Kerry rode their luck at times, but got there in the end. Their unbeaten record is intact.