Darragh Ó Sé: If Tyrone put as much into football as the dark arts, they'd be some team 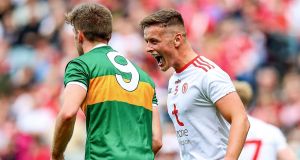 There used to be a fella locally who was known around the place as the laziest man alive. The lengths this lad would go to in order to avoid work were actually admirable after a while. We were talking about him one day coming home in the car when somebody made the very valid point that the effort our man put into not doing work was actually greater than the amount of effort the work itself would take. You’d nearly applaud the ingenuity.

I thought of him a bit on Sunday watching Tyrone. There was one stage where a substitution was being made and one of their players came over to the sideline pretending to be the one coming off the pitch before doubling back on himself in the confusion to show for a free. I was watching this thinking, ‘Christ, if they put as much thought and brain-power into the actual football as they do into all the other stuff, they’d be some team.’

Tyrone had Kerry where they wanted them on Sunday but weren’t able to see it out. A big part of it from Kerry’s point of view was the contribution of Tommy Walsh off the bench which, from a Kerry point of view, was the kind of thing that would warm your heart.

Now, Tommy had his own bit of dark arts himself, when he took a drive at Niall Morgan as the Tyrone goalkeeper came up to take a 45. But I’d be fairly sure that was nothing more than a rush of blood, a need to be doing something to cause a bit of wreck. There was nothing pre-ordained or orchestrated about it. I’d have done that kind of thing myself just to be industrious.

For Tommy to be back in an All-Ireland final now 11 years after his first one is some going. We used call him Dolph Lundgren, after your man in Rocky IV. We all had our Tommy impression ready for him any time he walked past. “If he dies . . . he dies . . .”

Tommy was probably the strongest man I ever played with or against. He just has this natural strength, bull strong. And a really classy footballer on top of it. I laugh when I hear people talk about him as if he has just come out of nowhere - Tommy kicked four points from play in an All-Ireland final, two from the left and two from the right. He had his time away in Australia and he got the same hamstring injury as Paul O’Connell at one stage. It’s been some road back to last Sunday for him.

Think about how the game has changed in the decade since his last All-Ireland final. Back then, a blanket defence was 11 men behind the ball. Now it’s 15 at times. Back then, Kerry’s kick-out strategy was get it out as far as possible away from the goals. On Sunday, Tommy’s two most important moments were coming back to his own half-back line to give Shane Ryan another option late in the game. All the buzzwords have changed, all the lingo, all that stuff. And still he was able to come on and be of use.

Fair play to Morgan, he kicked his 45 after all the pushing and shoving and messing that Tommy was doing to him on his way up. I found it funny though that on his way back into goal, he jogged past Tommy and didn’t even give him a sideways glance. Usually any Tyrone man worth his salt would have a word or two to give back to someone who had been roughing him up before his shot. Morgan obviously decided that it was late in the game and he’d leave that one go.

Saturday night was awesome from the Dubs. I was watching them after the parade had ended and I saw Brian Howard and Con O’Callaghan laughing about something or other together. It made me think, ‘Jesus, these lads aren’t tuned in here.’ If I had seen any of my teammates laughing like that so close to a game, I’d have taken the head off them.

But it just goes to show what a strong mentality these lads have. It’s like the story Kieran McGeeney told me one time about going over to watch Celtic in Neil Lennon’s first spell as manager. McGeeney knows Lennon from years back and he was chatting to him before the game at Parkhead.

At some point, McGeeney noticed the time and saw that kick-off was only half an hour away. “Jesus, I’ve kept you way too long, haven’t you to be down in the dressing room?” he said. Lennon just waved him away and said, “Nah, all the work has been done during the week. I only have to go down to open the door.”

The longer that game went on on Saturday night, the more you could see it in the likes of O’Callaghan and Howard and Paul Mannion and Brian Fenton. These lads have the work done, not just during the week but going back weeks and months and years at this stage. They’re so professional in the way they go about things and they will keep pushing and pushing until the dam bursts.

That’s what happened to Mayo on Saturday night. They thought they had Dublin in a game and then the dam burst. For O’Callaghan’s second goal, Lee Keegan got turned so badly, it was if he wasn’t Lee Keegan. It was like taking off the Spiderman mask and finding nothing underneath. O’Callaghan was too nimble for him and since he knew Keegan was on a yellow card, he just went for the jugular.

It’s a sad way for the decade to end for Mayo, after they gave so much to it. You don’t get any more out of sport than you earn so I don’t ever give a lot of time to anyone saying they deserve to have won an All-Ireland.

My way of looking at it is that the scoreboard has all these little numbers at the end and they tell you who deserves an All-Ireland and much as I’ve admired Mayo over the years and wished that they could get over the line, they didn’t and that’s all there is about it. Deserve’s got nothing to do with it, as Clint Eastwood said.

They’re great people, all the same. I was watching Saturday night’s game in a bar and before it a lad came up to me in a Mayo jersey. “Watch now,” he said. “We’ll beat the Dubs for ye and do ye a favour. Sure we can’t do any more for ye than that.” The unspoken verdict on how he thought a Kerry-Mayo final would work out in that scenario was half the joke.

But sadly for a few of their players, you’d have to imagine time is up. I can’t ever remember Andy Moran playing in a game where he couldn’t make the ball stick in the forward line. I actually thought James Horan should have put him on 10 minutes before half-time, when Mayo were doing well but they weren’t trying to stretch the field and get the ball into the full-forward line. By the time Mayo brought him on, it was game over, ball burst.

We’ll have plenty of time to talk about the final over the coming weeks. Even though it’s a huge task for Kerry to stop the five-in-a-row, there’ll still be huge expectation on them down here to go and do it. What would be seen as losing the run of yourself anywhere else is seen as normal behaviour among Kerry people.

I remember coming out of the 2014 All-Ireland final on a complete high because that was an All-Ireland title that Kerry won against the head. Nobody went into 2014 thinking there was an All-Ireland in that team and for Eamonn Fitzmaurice to get one like that was a massive thing. I floated out of Croke Park that day, delighted for him and them.

That was until I got talking to a Kerryman on my way out of the stadium. “God, it was awful football, wasn’t it?” he said. Imagine that! We’re after stealing an All-Ireland like a child in an orchard and my man is going about awful football.

So that’s what the young Kerry team will have to deal with in the next few weeks. The fact that the Dubs are looking so incredible and have hit such a high level will only buy the Kerry players so much leeway. They’re in the final, now they have to show what they’re made of.

1 Tianna Bartoletta: ‘After you’ve gotten your medal, you become black in America again’
2 Timo Werner giving up on Liverpool dream on path to being truly wanted
3 Betting shops face uncertain future as they prepare for Monday reopening
4 Mature Ringrose keeping the ups and downs of rugby life in perspective
5 Ian O’Riordan: An education in race and running during college days in America
Real news has value SUBSCRIBE