Jim Gavin: ‘I have never looked in the past for any motivation’ 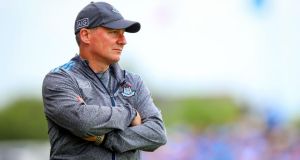 Jim Gavin: ‘The team is very humble, it has got its two feet on the ground, it understands what its purpose is.’ Photograph: Tommy Dickson/Inpho

Three weeks to the All-Ireland final and the Dubs have their media doings done already. Jim Gavin and Co fielded a couple of hours of the usual on Monday night ahead of a meet-the-supporters signing session at Parnell Park. The five-in-a-row came up, of course, and all concerned dead-batted it all with impressive ease.

“For me, all I’m interested in is the players going out there, trying to be their best and trying to execute their best performance,” Gavin said. “I have never looked in the past for any motivation, and that’s even internally.

“The team is very humble, it has got its two feet on the ground, it understands what its purpose is – and that’s that the players have a great drive that way to represent their county and their clubs and their communities and their parishes and their families and their mums and dads to the best of their ability.

“And to try and build on legacies that have been left by the teams before them, be it ‘53 or ‘63 or the ‘70s or ‘83 or ‘95. They’re just trying to add to that, and that’s really whose shoulders they stand upon. And someday it will all be finished for them and the baton will be passed on to somebody else.

“If one is looking back, you’re only looking back to reference the people who have forged this path for them, and they are only really stepping in their footprints that they have left.

“We’re acutely aware of how fine the margins have been in recent times and looking at Kerry and how they’ve performed this season, they certainly have no business in thinking anything but trying to execute a performance against them.”

A feature of Dublin’s last two games that hasn’t been seen before in the Gavin era has been the leaking of pictures of the match programme online in the days leading up, releasing the chosen team earlier than the famously secretive Dubs would wish.

By all accounts, this hasn’t gone down at all well behind the scenes, although the most Gavin would concede was that he was aware that it had happened.

“I heard that, yeah. So what we do is we give it to the county board, one of our selectors does the administration of that. Then after that it’s whatever those protocols – when it’s to be released, you’d need to check with Croke Park on that one.

“We just give it to them, I’m not particularly concerned after that. Obviously we need to give it early in the week and there’s a lot around that in terms of the players we are dealing with, they are amateurs, they are volunteering their time, they are all going to work, there’s different dynamics that can change. I don’t get too upset about it, don’t at all actually. It is what it is.”