Agony as Leitrim are denied victory at the death by Derry 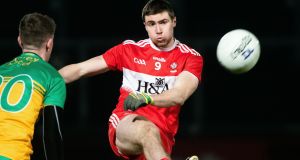 Leitrim produced a terrific performance to earn a point with Derry at Celtic Park in their opening Division Three clash. The underdogs led by two before late points from Ben McCarron and Ciaran McFaul earned the home side a late share of the spoils.

It was Terry Hylands’ team that settled best. Ciaran McFaul slalomed his way into an easy scoring position to open the scoring in the seventh minute, but Leitrm fired back with interest. Points from Keith Beirne and Shane Moran was topped by a 13th minute Cillian McGloin goal as Leitrim raced to a 1-3 to 0-1 lead.

Derry, struggling for any fluency, hit four in a row through Ryan Bell and Emmett Bradley. But again Leitrim volleyed back and stretched their advantage to 1-7 to 0-6 after half an hour.

However, Derry ran in at the interval 1-8 to 1-7 ahead when points from Eoghan Duffy and Chrissy McKaigue followed a thunderous Emmett Bradley goal.

Leitrim fired over the first four points of the second half before a Shane McGuigan goal dragged Derry level. Keith Beirne continued to nail his frees as the visitors kept their necks in front.

But with players in green and gold cramping all over the pitch, Derry finally found parity on the scoreboard. But much as they hungered for the victory, their opponents refused to fold and a draw was no more or no less than either side deserved.