Coming out of lockdown with Shane Kingston: ‘We’ll take whatever we get’ 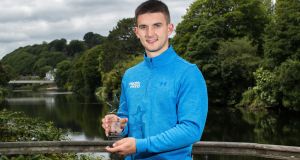 These have been testing times in the Kingston household. For Kieran, not long into his second coming as Cork senior hurling manager, interest in the league had already ended and hopes for any sort of championship were soon fading.

For his son Shane, the excitement of returning to the Cork team after his Fitzgibbon Cup win with UCC slowly and then suddenly faded too, before he found himself staring down the same dark tunnel. Would 2020 bring any further hurling for either of them?

Last Friday’s announcement of an accelerated return to Gaelic games offered the first real hope, although there is still some uncertainty: sometimes that light at the end of the tunnel turns out to be an oncoming train.

For Shane, the latest easing of restrictions meant he was able to get out to collect his Electric Ireland Rising Star trophy on Tuesday, almost four months after he delivered the standout performance in UCC’s final win over Carlow IT, his second successive Fitzgibbon title. While he’s ready to “jump” at the opportunity to get back hurling again, it’s not entirely without some concerns – only nothing to do with his return to play in the aftermath of Covid-19.

“Obviously some people will have concerns [about coronavirus], and that’s completely understandable,” he says. “For me, personally, I’d jump at the opportunity to go back. Thankfully, everyone in the family has been healthy, touch wood. It would be completely different if someone wasn’t healthy, you would be thinking twice about it. It’s completely up to the individual, really.

“Initially, it looked like no hurling for two months, and then it looked like we’d have nothing at all. It would have been a disaster if the whole year was written off, and we had nothing. So being optimistic, and thinking about how you were feeling a few weeks ago, you’d take anything. For me I don’t mind what format it [the championship] is.”

Kingston’s concerns are mainly about the potential longevity of it: for now, the GAA have agreed that pitches still won’t reopen until June 29th, when small group training of up to 10 players will be allowed; full contact training for clubs can start on July 20th, with games from Friday, July 31st. This club window is then set to last 11 weeks, ending on October 11th. Intercounty training can only resume on September 14th, before the championship starts on October 17th at the earliest, possibly spilling over into February 2021, if required.

“No matter what way it’s done, some people will be giving out. Given what’s going on, and with such little preparation, it might be right for teams to have a second chance. But if it does run from October to February, it becomes a 14-, 15-month season, really, when people are still on about player burn-out.

“If things do go as far as February, that’s probably the Fitzgibbon wiped, and if you’re playing an All-Ireland semi-final or final in February, are you really going to be looking at playing the league a week later? It’s the unknown really, but at least we have something to look forward to. We’ll take whatever we get.”

Even with Cork’s traditional preference for the fast hurling of the dry summer ground, he’s not concerned about playing games in October: “Well number one it’s the same for everyone. Number two the pitches should be unbelievable, so I don’t think it will make that much difference. Croke Park should be like a carpet. It mightn’t be the most favourable conditions but you’re going to go out and play anyway.

Unlike his father, who can’t practice much of his management skills outside of maybe his dreams, Kingston has been getting in some considerable practice most days: “At the start you’d still be nearly training flat out, then after a while, you realised you were in for the long haul, and toned it down a bit. I’d exams as well, so took a break. But no matter how much you’re doing, you’re not match fit. When you’re getting a belt, or trying to take someone on, getting the hits, it’s completely different, so I would say no one is match fit really. It’s a different kind of fitness.

“I suppose it’s kind of player accountability there as well. A lot of fellas have been tipping away on their own anyway, running, wall hurling. With 11 days of contact [before club games resume], you might be picked up a lot of niggles, but it’s better than not having anything, and hopefully we’ll get through it.”

Kingston turns 23 in August, and this will mark his fifth season as a Cork senior: “I’ve been fairly lucky with injuries, bar from breaking my leg [as Cork minor captain, in 2015]. A muscle injury now though could be your whole championship gone, so it’s important to look after yourself in that regard. The time off has allowed the body to recover a small bit, and work on some new things. It wasn’t ideal scenario, but it was more for my sanity really.

“So I was training away the whole time, really whereas for him [his dad], he was tearing his hair out, not knowing what’s going on, so he’s delighted now to have something to look forward to. We all are, obviously.”