'I find it hard for the players in this argument. We’re not asking for professionalism' 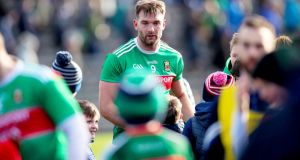 Aidan O’Shea: ‘We want to train and work as best we can as individuals, as a team and provide the best product on the football pitch’ Photograph: Tommy Dickson/Inpho

Aidan O’Shea’s antennae twitch at the question about professionalism and Ulster secretary Brian McAvoy proclaiming the current pandemic-wrecked season as the end of any argument that the GAA could sustain the erosion of amateurism.

Firstly, the three-time Mayo All Star hasn’t any real argument with the status quo and points out that neither has the Gaelic Players Association. Secondly, he believes that the more relevant concern here is the amount of money being lavished on county teams and he sees both sides of that equation.

What occupies him, though is a simple question: “Who’s driving professionalism?

“Is it really the players and the boards or is it the expectation from the supporters and everyone else that is out there? Supporters want their teams to do the best, they want to see them competing. That space is expensive.

“I find it hard for the players in this argument. We’re not asking for professionalism. We want to train and work as best we can as individuals, as a team and provide the best product on the football pitch.

“I’m not giving you an answer to the question. It’s a difficult one. I understand the costs are crazy and maybe there should be controls around that but high performance sport is expensive and that’s what we’re in.”

O’Shea turns 30 this year (“Thanks for pointing that out”) and like every other footballer, is waiting for some word of a return to action. He raided the local gym before it closed for the gadgets necessary to supplement his home training base and is studying – again, remotely – for an IMI diploma in leadership.

A basketball enthusiast – he played three years ago for Division One side EJ’s Sligo All Stars – he thought the Michael Jordan Netflix series The Last Dance, “brilliant” and says that the sport has benefited his defensive play in football.

He has been at the heart of the county’s by now semi-mythical quest for Sam Maguire for more than 10 years. He will also be aware that in the minds of most, the curtain is coming down on that quest.

Even the obvious question about the potential upside of rest for Mayo’s officer class in the current shutdown is met humorously but with the slight suspicion that this is stereotype.

“We’ve a ridiculously young squad – what do you mean! Ah no, there’s probably some benefits, I suppose. Jason Doc [Doherty] had an ACL injury last year so he’s coming back and in a good place. You’ve Cillian [O’Connor], Donal Vaughan and Mattie Ruane, who had a shoulder operation after the Sigerson and in that space we are I think quite lucky.

“The same narrative is going to be there when we get back: the same players, et cetera, et cetera but I think there’s been a bit of a change there. Anyone who’s been following us closely can see there’s a change. We’ve brought in some good players in the last 18 months in particular. I think we played some crazy amount of players in the Championship last year, up on 30-something players and then in the League close to 40.

“So yeah, I think the break probably suits some of our players but probably not the younger ones who felt that they were in a bit of a rhythm and maybe had put their hand up in some of the spots before those boys came back. But there are those who will benefit from the time to recover and get back at it.”

Ah, getting back and its attendant complexities.

O’Shea welcomes the fact that there’s more clarity if understandably precious little definition about the GAA’s plans to return, something he spoke about on RTÉ’s Late Late Show in April. He accepts that the direction will be determined by the experts, NPHET at State level and Croke Park’s Covid-19 Advisory Group.

Flexibility may be required in the time ahead. He understands the arguments for prioritising county over club but although aware of the challenges ultimately prefers the official position of club first.

“If we were playing Castlebar in a knockout championship game in August, there is nothing to suggest that you wouldn’t have 2-3,000 people at it, and then how you manage that from a club perspective, I don’t know.

“We have players living in Dublin, they are going to be travelling back the country. There is challenges there from a club perspective. I don’t want to speak for every club player, but I am sure as I said already there are people with concerns around that.

“Is the intercounty game a little bit more controlled in terms of numbers, in terms of resources? I would think it is. But as I said, I think if we are building this back up, I think the club needs to be front and centre.”

Whereas he feels that intercounty matches behind closed doors, “flies in the face of the GAA and what we are about – we’re not a professional organisation; the whole idea is that it is a community-based game,” he would “be up for it” were it to bring “a bit of joy back to people in their houses”.

He nonetheless accepts that there will be an element of risk in any return to play in the near future.

– Aidan O’Shea was speaking at the re-launch of the AIB series The Toughest Trade, which will screen in June on Virgin Media TV.