Ciarán Murphy: Alan Dillon leaves knowing he gave it his all 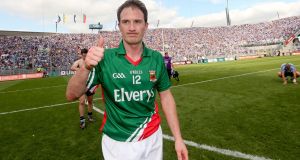 Alan Dillon celebrates Mayo’s win over Dublin in 2012. He served the county with great distinction over a long career. Photograph: James Crombie/Inpho

The news earlier this week was of retirements and returns. For Wicklow’s James Stafford, he apparently couldn’t say “no” to his new manager John Evans when he came suggesting a return to the inter-county scene.

And in Mayo, Alan Dillon finally said goodbye after 15 years of service to the Mayo seniors. Both of them are 35 years old.

The process of coming to terms with your advancing years was once upon a time begun by that moment when the Gardaí started looking younger than you. My older brother managed to convince himself that, as long as there was a player the same age as him still playing in the Premier League, he had a shot at making it. The retirement of Ryan Giggs was thus a painfully long overdue moment of reckoning.

As a fellow 35-year old, I feel a certain kinship with Messrs Stafford and Dillon. Both of them have made their decisions with a clear conscience.

Notwithstanding the absence of a Celtic Cross, Dillon couldn’t have squeezed any more from himself. He failed to win an All-Ireland final in eight attempts, more than any player in history, but he played an extraordinary 66 times in the championship for Mayo. He simply didn’t have any more to give, and that’s a perfectly understandable, perfectly relatable feeling that many club players can empathise with.

As he said himself in his announcement on Tuesday – “I stand here at the end of this ride, knowing I gave it my all. I look forward to the next chapter and know that I have been blessed in so many ways to have experienced what I have.”

Stafford is slightly different. He was magnificent throughout his time with Wicklow before he announced his first retirement in 2015, particularly during Mick O’Dwyer’s time involved, when for all of Leighton Glynn’s international rules profile, he was the dominant player for his team.

They won their first ever game in Croke Park in 2008, against Kildare, and beat Fermanagh, Cavan and Down in the qualifiers in 2009 – and through all those successes he was immense at midfield.

But before and after those couple of years, there must have been regrets; regrets that his fellow players weren’t more committed, regrets that he didn’t receive the best coaching he could have gotten, regrets that the work required to get Wicklow moving forward and up the divisions wasn’t being done.

People will say that Dillon is the man with regrets, and after eight All-Ireland finals without a win, you can certainly see where they’re coming from. But as an athlete, as a footballer, could Alan Dillon have wrung anything more from himself?

Cillian O’Connor summed it up best on Twitter on Tuesday – “obsessive dedication, selfless workrate, and team first, always. Can’t overstate his effect on Mayo over 18 years. If in doubt about anything, ‘What’s Dillo doing’ was always the q [uestion]. Thanks.”

As you move into your mid-thirties, you realise that the regrets that really hurt aren’t the ones that Alan Dillon feels this week – the regrets that events beyond your own personal control couldn’t be corralled in your favour. That’s sadness, but it’s not regret, not in it’s most painful, personal iteration.

The regrets that really sting are the ones where you question if there was anything more you or your colleagues could have done. Those times when you feel like with a little more effort, things might have worked out a different way – in sport, and beyond sport too, of course.

As I saw the guards get younger, the clothes get progressively less wearable, and the sleeve tattoos more ubiquitous, I realised earlier this year that football was an itch I just hadn’t scratched to my satisfaction. Since I turned 21, I had missed more football seasons than I had played.

The regrets were not about matches played, although the county final (10 years, one month, and two days ago today, not that anyone’s counting) still smarts, but the football-free summers. And so it was that in June I found myself joining my local club Templeogue Synge Street, helpfully situated nowhere near either of those places, but very close to my house.

It might be romantic to say that playing for their second team was my version of raging against the dying of the light. The truth is rather more prosaic.

Football is a wonderful sport, and I just hadn’t played enough of it yet. And when I do feel the darkness descending, it will be hopefully be like those summer evenings of your youth when impersonating Marco Van Basten or Mickey Linden kept you entertained past 10pm. Not rage, in short, just happiness that you’d drained the day of every last drop.

We can all appreciate why Alan Dillon stepped away this week. We should also see the romance in James Stafford coming back for one more bite of the cherry. No regrets.