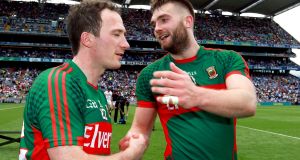 The last thing Aidan O’Shea needs is another rallying call, or some gentle reminder that as close as Mayo have come to that elusive All-Ireland, their time is not linear.

Still something about the retirement of team-mate Alan Dillon after 15 seasons with the Mayo team seems to have struck a chord. Dillon was involved in six senior All-Ireland finals and lost them all, plus another two minor finals, and so walks away at age 35 with that sense of being faraway, so close.

“Sport is funny like that,” says O’Shea. “He could have been the most decorated footballer if things had gone different, one or two small things in games. But sport is cruel.

“And I’d be very close to Alan the last couple of years, so sad to see him go. A class footballer, one of the best I’ve played with. I went from looking up to him, to playing with him, and now a very good friend, and work with him. But he’s had a massive career for Mayo, and been one of the best to don the jersey in a long time.”

And as O’Shea prepares to enter his 10th season with Mayo, Dillon’s retirement also reinforces his own determination to make the most of whatever years he’s got left.

Not that Dillon walks away completely empty-handed.

“He’s eight Connacht medals, two All Stars, and Alan had the opportunity to compete at the highest level, some players don’t get. Players all over the country have missed out. In fairness to Alan, he pushed his body as far as it can go to get over the line. Last year, be broke his foot in a drawn game, kicking an important score. Then came on in the replay. He’s that kind of guy, a great fella around the group.

“But from the time perspective I’m aware as anyone, going into my 10th season now, so I think we’re very aware of the age profile. We’re all aware of the time we have and trying to capitalise on that while we can. We have tried to do that but have fallen short and the window is narrowing probably but we have to keep at it

Not that O’Shea has for one second contemplated a career without winning an All-Ireland.

“You are motivated as ever. You crave for those moments that we have put ourselves in and the motivation is to get back there. The problem we have had the last couple of years is nearly focusing too much on being there instead of focusing on the journey.

“You can’t get obsessed in getting back there and trying to win the All-Ireland because there is so much stuff that can happen in between.”

O’Shea sees Andy Moran, now 34 and named footballer of the year for 2017, has further motivation to keep on keeping on.

“We’re obsessed in the GAA with finishing boys’ careers once they turn 30. I understand it in terms of we’re amateur athletes and people have lives, family, work, all of that, but if guys are prepared to put in the preparation and work their life around football like Andy, there is absolutely no reason why people can’t do what Andy did into their 30s.

“I’m not saying going to 40 or anything like that. He’s gone through a couple of bad injuries but the way we played this year really set it up for him. The way he has changed his lifestyle around, in terms of his work, has really helped him do it. He has been a revelation.”