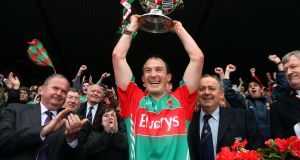 Mayo’s elusive quest for Sam Maguire will go on in 2018, but without the services of former All-Star forward Alan Dillon, after he confirmed his retirement from intercounty football on Tuesday.

The former Mayo captain has eight Connacht medals, two All-Stars (2006 and 2012) and has been involved in six All Ireland senior finals.

Playing the game, representing this team, giving my all and never letting go has meant everything to me

During this year’s championship Dillon’s three appearances all came off the bench, the last of which coming in the All-Ireland quarter-final replay win over Roscommon. Dillon however was in fine form for his club Ballintubber who reached a fifth county final last month, but he was denied his fourth winner’s medal by Castlebar.

On Tuesday morning Dillon said the following in a statement released by Mayo GAA;

“Everyone has their time and my time has come . . . Today I wish to announce my inter-county retirement from the Mayo senior football team.

“Playing the game, representing this team, giving my all and never letting go has meant everything to me. If asked to write a script for my career back in 2003, there is no way I would’ve been able to imagine this journey but now I feel it’s the right time to step away.

“The wins and losses will be remembered, but what I’ll remember most are all my team-mates who I can never give enough credit to from over the years. I have played with some of the best players to ever line out in the red and green of Mayo and have also had the honour of captaining this great county.

“I was very fortunate to have played under so many fantastic Mayo managers all of whom contributed greatly to my career and I would like to extend my sincere thanks to them all for putting faith in me as a footballer.

“Thank you to the people of Mayo for all your support over these years in the good and challenging times. It’s been a humbling experience and made me realise how lucky and privileged I am. I would also like to thank the Mayo county board and all the selectors, trainers, backroom staff and medical teams who pushed me and held me together on and off the field.

“I will always be eternally grateful to my club Ballintubber GAA. Their backing has enabled me to compete at the very highest level and follow my boyhood dream of playing for Mayo. I wish to thank the GPA for their continued support on behalf of myself and inter-county players all over the country.

“Finally to my wife Ashling, my parents Gerry and Eileen, brother Gary, sister Lisa and close family and friends, I sincerely thank you for your understanding, loyalty and support. I will be forever grateful for all you have done.

“The sense of genuine pride every time I got from wearing the Mayo jersey and representing this county I love will live with me forever. I stand here at the end of this ride, knowing I gave it my all.

“I look forward to my next chapter and know that I have been blessed in so many ways to have experienced what I have. I will continue to support this talented Mayo team for the years ahead and would like to wish the current manager Stephen Rochford and his team the very best for the coming season.”

Rochford himself passed on his best wishes on behalf of the current team and management, who will next year again look to end the long wait for a first All-Ireland senior title since 1951;

“Alan’s talent was evident from a very young age and he was rightly heralded as a future star by his mid-teens. There was huge versatility to his game. And all of this underpinned by a powerful determination, and an unyielding desire to win and to progress, that he showed each and every time he put on the Ballintubber or Mayo jersey. Alan Dillon won the admiration of GAA fans from all over Ireland and he leaves the inter-county stage with his head held high.

“As Mayo manager for the past two seasons, it has been a pleasure to work with him and I know that he will continue to make a telling contribution to his club and county in the years ahead. On behalf of the Mayo team and management, I wish him the very best.”

Moloney on song as Tipperary prove too strong for Westmeath 20:45
TV View: No Beano on the couch as Dennis proves a right old menace 19:06
Newcastle feel the heat as Arsenal get some of their old mojo back 19:18
Clare pull well clear of Laois to keep unbeaten run intact 17:51
Offaly pick up first league win 17:44
Crossword Get access to over 6,000 interactive crosswords