Nemo hopeful Kerrigan will be fit for All-Ireland semi-final 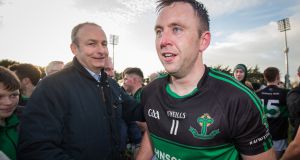 After overcoming reigning Munster and All-Ireland club football champions Dr Crokes, Nemo Rangers of Cork face into the now three-month break with some uncertainty over the fitness of star forward Paul Kerrigan.

Kerrigan came off injured late in Sunday’s surprise win over the Kerry champions at Páirc Uí Rinn, although early indications are he has sustained only a minor knee injury and should be back in time for their All-Ireland semi-final date with back-to-back Ulster champions Slaughtneil. That game is set for February 17th, 2018.

That being 12 weeks away, Nemo at least won’t have to rush him back. Manager Larry Kavanagh was initially fearful in the aftermath of Sunday’s game that the player had suffered ligament damage. Kerrigan scored a point and set up several others as Nemo prevailed 0-16 t 0-11, to secure the club’s 16th provincial success .

Cian Mawhinney, who picked up a serious back injury in the county final, remains a long-term injury concern.

While that semi-final pairing is certain, Connacht champions Corofin still have to navigate an All-Ireland club quarter-final with Fulham Irish, that tie confirmed for McGovern Park, Ruislip on Sunday, December 10th

After putting Connacht titles back-to-back on Sunday for the first time in their history, Corofin must trip to face the London champions for the second time in four years. The Galway outfit overcame Tír Chonaill Gaels at the quarter-final stage in 2014 before going on to claim the All-Ireland title three months later.

It will be the last time that the London champions automatically qualify for the All-Ireland club SFC quarter-final; next from year onwards, the British representatives will compete in the Connacht club SFC.

Assuming that game goes to form, the football semi-final pairings, set for February 17th, will then be Ulster (Slaughtneil) versus Munster (Nemo Rangers), and Leinster (TBC) versus Connacht (Corofin).

In hurling, the semi-finals are set for February 10th, and it’s Munster (Na Piarsaigh) versus Ulster (Slaughtneil), and Leinster (TBC) versus Connacht (TBC).

1 Reality Bites – Tales from the new normal: Caitríona Cormican
2 A beautiful, happy accident - Moneyball is the best sports movie ever
3 Nicholas Quinn: ‘Swimming became how I dealt with grief’
4 Karen Robinson Walton: I am looking at him. I say ‘Benjamin, what have we done?’
5 James McClean still failing to learn his own online history lesson
Real news has value SUBSCRIBE