Paul Flynn on aims for 2018 and Cluxton's badminton prowess

Multiple All-Ireland winner keen to continue: ‘No intercounty footballer wants it to end’ 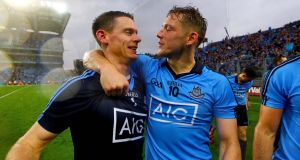 Some footballers like to tip around in the off season while others prefer to do nothing at all. Stephen Cluxton can be seen down in Portmarnock badminton club, deftly varying his racket swing like he would his Dublin kick-outs.

“I wouldn’t mind, he’s unreal at it,” says team-mate Paul Flynn. “I was doing a few bits, a bit of five-a-side, one or two session in the gym, and I went down and played a bit with him.

“We went in the first day, I thought he might be kind of above average, but no, the club is a very high standard and he’s up with the top lads. I was only watching from afar so I don’t know whether he was the best but he definitely looks like he was doing well. Badminton Ireland will be on to him.

“But it’s a good sport to get you moving anyway. Two hours of that would keep the fitness levels up, but other than that, just keeping fit really, bit of spinning.”

Speaking at the launch of the Coca-Cola designated-driver campaign, Flynn is already thinking about the 2018 season: now 31, the five-time All-Ireland winner is intent on extending his career as long as possible, despite experiencing limited game time this summer due to injury.

“You don’t want it to end. No inter county footballer wants it to end. I always feel go as long as the body allows and the body will dictate when the boots are hung up.

“My season this year was more frustrating than any in the past because the week before the first championship game, I pulled my calf. If you’ve ever pulled a calf before it’s a little frustrating injury. Four weeks out, I missed the first game. I was probably in line to start the first game.

“Four weeks into the injury pulled it again. I was actually back full training, building up to the Leinster final. I missed the second game too.

“I pulled it again. I actually pulled it worse the second time and I was lucky to make the Monaghan game as a sub. It completely changed my whole perspective of the season. because I was like ‘just get me back into the field to play any part’.

“But I’m not going to sit here and say when you’re over 30 that you are happy to sit on the bench, because I am not. We all want to play. That’s the thing. I think that’s the strength of the squad because these boys, even if they are 30, they are guys who are starters, who would be key players in the team and they are going want to play again.”

“Colm is entitled to his opinions on these things. But on some of the points that he raised we shared a note to the members to just highlight what was being said and to clarify a few points. With regards to the salaries; firstly, yes it is not for profit but it’s an organisation that needs to be run. I see it day in, day out because I work in recruitment and there’s a war on talent out there.

“I think there is still a bit of work to be done to make sure everyone in the wider GAA community understands it . . . I think the GPA have played a serious hand in helping get there.

He also rejected criticism from former Monaghan footballer Dick Clerkin that the Dublin footballers had snubbed the International Rules series.

“It’s not as if there was a wide thing of ‘here, any Dub please come along’. They picked lads who were on form and who they felt could add to the team.

“Unfortunately some of those lads had club commitments. I know because I was talking to a few lads who were mad keen to go . . . and they actually just couldn’t go.”

1 Betting shops face uncertain future as they prepare for Monday reopening
2 Timo Werner giving up on Liverpool dream on path to being truly wanted
3 Mature Ringrose keeping the ups and downs of rugby life in perspective
4 The Irish Times shutdown sports quiz: Part three
5 Ian O’Riordan: An education in race and running during college days in America
Real news has value SUBSCRIBE