Provinces accept that Railway Cup has run out of track

Munster, Ulster and Leinster resigned to fact it’s end of the line after Connacht withdrew 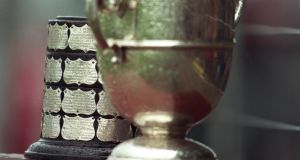 The Railway Cup: it appears like the old interprovincial football competition has finally run out of steam. Photograph: Andrew Paton/Inpho

After the announcement of Connacht’s decision to withdraw from the GAA’s interprovincial series, the other three provinces have indicated that they believe the end has come for the 90-year-old competition, formerly known as the Railway Cup.

Although Connacht made the decision some months ago, it had already been decided that this year’s competition would not go ahead because of pressure of fixtures. Next year’s master fixtures’ list makes no reference to it either.

Chairs of the other three provinces believe however that such pressures had made the future of the interprovincials untenable, especially with the new calendar.

“They weren’t scheduled at all for this year,” said Munster’s Jerry O’Sullivan. “The reality is that it appears the players are interested but it’s so hard for them at this time of the year with the extension of the club championships and to be honest the time of the year wouldn’t do justice to any competition.

“The biggest factor is that the public support seems to have disappeared completely. We have all heard about the great days when you used to get 50- and 60,000 in Croke Park but in those days people didn’t see the players at all. Now they can see them all the time.

“The calendar is virtually full all year now. There just aren’t dates for a competition like this with the Australian tour, the All Stars and the Fenway hurling.”

Financing the competition was a contributory issue in Connacht’s decision but not for O’Sullivan nor Munster.

“There is expense involved but it wouldn’t be a major factor. We’d be happy enough to fund it but with the club championships as big as they are now and with junior and intermediate, a lot of players are involved.”

The news is particularly unwelcome in Ulster where the Railway Cup has always enjoyed a greater level of engagement than in other provinces.

“Unfortunately it’s just recognising the way the fixtures are,” said Michael Hasson, chair of the Ulster Council. We would have been supporters of the Railway Cup, surely, but there have been diminished attendances even if there’s still interest up here.

“This weekend we have the finals of our junior, intermediate and senior club championships. We’d be hoping to get them all finished, weather permitting, but it’s just become more difficult to find dates for the Railway Cup and Ulster would know that. At the end of the day we’ve been adjusting our fixtures to accommodate more club games and that’s what it’s all about.”

Jim Bolger, O’Sullivan’s and Hasson’s Leinster counterpart, reacted ambivalently but agreed that the competition had in all likelihood run its course.

“It has an air of inevitability but there are mixed views in Leinster. Some of the players would like to keep it on. With Connacht nailing their colours to the mast it’s going to be hard to get traction on it. It probably has served its purpose overall but I’d still like to go back to see what the teams think.”

From 2018 the GAA is trialling the most ambitious fixture schedules in its history with far more championship matches being run off over a tighter calendar in order to allow club activities greater space.

For Hasson the three-year trial of the new fixtures’ calendar offers some hope that the interprovincials’ time might come again.

“You would never say never because there’s still a good appetite for it in this part of the world. I suppose the fact that the new championship schedule is being done on a trial basis means that we’ll see how it works and goes from there. The most important thing is that there is time set aside for clubs. We realise that.”

Bolger also retains an outside hope that an accommodation can be reached.

“The advent of the club championships as they are now has made it difficult but there might be a case for putting interprovincials on with the All-Ireland club finals, hurling on St Patrick’s Day and football a week later and alternate it. You see people leaving after the first final and maybe they’d stay if both hurling and both football matches were on the same day.

“That possibly might work but overall it doesn’t look good for the future of the Railway Cup.”