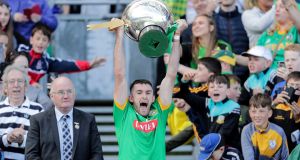 The showcase of Saturday’s three final programme in Croke Park saw Meath promoted to the Joe McDonagh cup for 2020 with a strong finish.

The Royal County got a response from their bench with both Nicky Potterton and Callum O’Sullivan both coming on to fire home goals as Down’s challenge wilted with 15 minutes to go.

The Ulster men though had put it up to their opponents early on with the Sands brothers, Daithi and Odhran, both influential in the first half.

That said Down were playing catching up from an early stage with a 13 minute Adam Gannon goal forming part of 1-4 run for Meath.

Then on the quarter hour Jack Regan had a penalty stopped by Down keeper Stephen Keith, and it would prove an important intervention for Ronan Sheehan’s charges.

And with half an hour gone in the game a sideline ball played in from the left saw full forward Odhran McCann dragged down inside the square with Paul Sheehan duly converting the penalty to leave three between the sides.

The two sides then traded points before before Daithi Sands cut in from the left to tie the game.

However an injury time point from Jack Regan restored Meath’s lead at the break, 1-12 to 2-8, and then straight after the restart Potterton took a pass off Gannon to fire in Meath’s second.

Meath continued to pressure Down, with Gannon grabbing their third on 44 minutes to bring their lead out to five, but Down stayed in contention until a number of points from Regan saw Meath pull away.