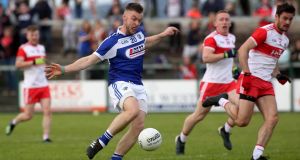 Eoin Lowry’s goal late in the game was the key score as John Sugrue’s men progress to round three of the qualifiers, defeating Derry by four points at Owenbeg.

The Oakleaf County drew first blood when Ryan Bell dissected the posts after just two minutes of play. A Shane McGuigan free soon after doubled their lead as Damien McErlain’s men threw down an early gauntlet. The visitors accepted the challenge and a Colm Murphy point opened the Laois account in the sixth minute, with Evan O’Carroll levelling matters a minute later.

The sides were still level on the half-hour mark at 0-6 each. A Daniel O’Reilly point left his side trailing by one at the break, with Derry 0-8 to 0-7 up.

Derry opened the second half scoring through captain Chrissy McKaigue. However, back to back Donnie Kingston frees brought Laois level at 0-9 each as both sides refused to blink.

Kingston’s third point of the second half cancelled out Ryan Bell’s free, before the same player edged his side ahead 0-11 to 0-10 after 48 minutes.

Lowry’s 66th-minute goal would prove to be the game’s crucial score and finally brought daylight between the sides. And when Kieran Lillis pointed in the 70th minute it confirmed victory for Laois.