Kildare put Dublin defeat behind them by lapping Antrim

Lilywhites secure 14-point win over Ulster side in Belfast 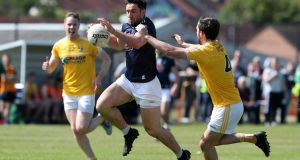 Kildare footballers negotiated their first outing since defeat to Dublin with a fair degree of comfort, having 14 points to spare over Antrim at Corrigan Park in Belfast in the second round of the All-Ireland football qualifiers.

A second-half goal from Fergal Conway sealed the deal for the Lilywhites who led by 0-13 to 0-6 at the break.

“I don’t know many teams get beaten by Dublin and lose their next game. I think it’s a ridiculous percentage, maybe 80 per cent – so it was nice to bounce back,” said Kildare manager Cian O’Neill. “We would rightly have been criticised in the past for playing in patches and letting teams back in but today, to be fair, the lads stuck to the task for large periods.

“There are lots of positives but we still have lessons to learn for the next day.”

Kildare controlled the game from the start with Neil Flynn and Adam Tyrrell scoring 10 first-half points between them.

Antrim closed the gap just after the restart through Matt Fitzpatrick but Conway’s goal on 40 minutes put paid to any chance of a comeback.

The Saffrons battled on with Paddy McBride impressing with six points from play but Kildare were a class above the Division 4 side.