Patient approach pays off as Mayo end their drought in Ulster 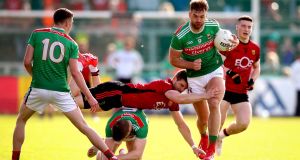 It may not have been their Rubicon, but winning a championship game in Ulster can finally be thrown on to Mayo’s resume.

More importantly for them they continue their summer, as was expected.

Yes, they looked a mile off their best. And yes, the encounter didn’t have the look of a Division One side against a Division Three one. But, as is their wont, Mayo huffed and they puffed, clung on by their fingernails and they remain a team to be avoided as the summer trundles along.

Prior to their visit to Newry Mayo had only played once in the championship within Ulster, coming out of Derry with a defeat back in 2007. 12 years on, with only David Clarke and Andy Moran still fighting the good fight, Mayo cruised back down the motorways with a win to their names.

Acumen gathered by veterans, on a well-travelled path, may have helped the Westerners get over the line in the Mourne County, but it was an evening when youth came to the fore.

“The team we finished with at the end - with Mickey Murray, Ciaran Treacy, Fergal Boland. Michael Plunkett among others - was a very young team,” said James Horan, putting a gloss on a win that should perhaps have been more comprehensive. “Some of them did very well to see it through. It’s great to get those guys on.”

The game itself took off at a handy canter, both sides knowing the stakes and neither particularly eager on the idea of taking an early holiday. Nerves were palpable, mistakes plentiful.

A Paddy Tally defence was always going to require either some exquisite long-range shooting or precise eye-of-the-needle passing; early on Mayo showed little evidence of either. But, as the half wore on, what they did begin to exhibit would prove crucial: the virtue of patience. Especially when Caolan Mooney burst through to rattle the Mayo onion bag in the ninth minute.

Spotting a number of defenders slightly flat-footed, the wily Down man weaved his way through red and green jerseys before neatly placing the ball beyond the grasp of David Clarke, interrupting the impetus Mayo were beginning to find.

But amidst all Mayo’s mistakes. patience shone through. Conor Loftus stepped seamlessly into free-taking duties and four points without reply, three from the boot of Loftus, had Mayo pulsing.

Yet James Horan’s men often left holes unplugged at the back, enabling Down to break at pace and breathe heavily down their visitors’ necks. Pat Havern slotted one from a quick attack. So did Owen McCabe. And the Mayo that had began to career off ahead were suddenly beginning to pant.

With the half-time whistle approaching it was then time for Mayo’s young guns to step aside. The old guard were ready. First, Aidan O’Shea burst through a gap to bisect the uprights before spectators were treated to a championship rarity - Chris Barrett making an appearance in the forward line to score the final score of the half.

Still, after 40 minutes of action, Down had shown enough to foster belief.

A goal from Loftus within minutes of the restart quenched most of that. It could have been so different had Mooney scored a second goal only moments earlier when running a line Brian O’Driscoll would have been proud of. Alas, he blasted over.

“I think the goal that Mayo got in that second half turned the game in their favour,” suggested first-year manager Paddy Tally regarding the game’s major turning point, “and we didn’t take ours.”

“When you’re starting with a brand new team, a new set-up - it’s not only a whole new football team, you’re creating a whole new culture, a new environment. You’re creating something the players can really buy into. We think we have that started anyway”

Down certainly have a base to start from and having gone toe-to-toe with Mayo, they have something to aim for.

From that early second half strike, Mayo did what they needed to do. Never blowing the home side away. Never driving in that final dagger.

They did the job the way they know best - the Mayo way.