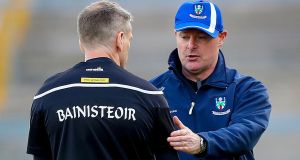 Malachy O’Rourke will not be back in charge of Monaghan for the 2020 season. Photograph: Tommy Dickson/Inpho

You know this is proper knock-out when defeat resonates more than victory. We were gathered around Jim McCorry, the Armagh coach, listening to him heap praise on the team’s best performance of the year, when behind our backs we heard Malachy O’Rourke tell a local radio man he was stepping down.

So one-by-one we gently shuffled over to where the immediate story was, like the sympathetic creatures that we are.

Armagh were utterly deserving of this win, and will be hairy opposition for anyone in Monday’s round three qualifier draw. Manager Kieran McGeeney doesn’t enlighten us with any lessons these days, but McCorry, himself a former Armagh captain and manager, was honest and wise when noting “it’s only a win in the qualifiers, it’s important to put it in perspective, even if it was great to beat Monaghan away from home”.

And that beating, in the end, was convincing, and helps explain the speed with which O’Rourke came to his decision after seven seasons of Sundays, during which time he delivered two Ulster titles, in 2013 and 2015, and came within a point of Tyrone in last year’s All-Ireland semi-final. Monaghan also started off their 2019 league by beating All-Ireland champions Dublin, only they’ve been yielding at almost every juncture since.

“Seven years is a long time, and I felt at the start of the year that this could be it, regardless of how we done,” said O’Rourke, his success in Monaghan always matched by his popularity. “But it is with a heavy heart, I’ve had a brilliant time with the boys, a massive group of players.

“I just think at this stage that maybe a fresh voice and a fresh impetus coming in will be the best things to rejuvenate the thing. It is tough, all-consuming, a lot of work goes on which is unnoticed. But look I can have no complaints, the boys in there have given me absolutely everything, massive memories.

“So look it has been a great time but I think it is the right time to step down. I didn’t really want anyone twisting my arm, you just get a feeling yourself, and a fresh voice may be just what they need at this stage.”

Still it felt for a while like destiny couldn’t tear these two apart, both teams lighting up Clones on Saturday evening with another belter of a first-half of Ulster football, before Armagh slowly and then suddenly soared in front and with time to carve the result in stone.

They hit a level of clinical efficiency and relentless pace that Monaghan simply could not match. After going toe-to-toe for the first half, Armagh stole a foot and then a march, opening the second half with three unanswered points, then a goal on 48 minutes: a super sweet pass from Jemar Hall to Aidan Nugent sent him tearing down on goal, and while Rory Beggan did well to block his shot, there was no denying Rian O’Neill with the rebound.

Ten minutes after that O’Neill had his second goal and Armagh were safely out of Clones. Jamie Clarke had been harassing the Monaghan defence all evening, breaking the ball out to O’Neill who again wouldn’t be denied. They were 2-15 to 0-11 at that stage, some of the Monaghan supporters heading home for an early tea.

Monaghan were kept to 1-2 in the second half, needing 23 minutes to find their next point, then a late consolation goal for Jack McCarron on 66 minutes, only by then Monaghan’s limitations were fully revealed: they only had six different scorers compared to Armagh’s 13.

Armagh had just the point to spare at the break, 0-11 to 0-10, but their scores were spread a lot more impressively - defenders Mark Shields, Brendan Donaghy and Paul Hughes setting the pace, before all six starting forwards came into their own, including two from the electric boot of Jemar Hall, one each for Aidan Nugent, Stefan Campbell, Clarke, Jarlath Óg Burns, Andrew Murnin, plus a free from O’Neill.

Monaghan stuttered a little midway through the half, and briefly fell 0-8 to 0-5 in arrears, three of those scores from the ever present boot of Conor McManus. Armagh then struggled with the kick-outs, two 45’s from Rory Beggan, another McManus free, and a point from Micheal Bannigan briefly sending Monaghan in front. They just couldn’t quite sustain that.

“We trained hard, the boys worked really hard, but we just couldn’t get that spark we were looking for,” added O’Rourke. “We just didn’t look to have the same freshness that we had at other times.”

That Armagh won pulling away, with eight points to spare, also won praise McCorry: “Some of our earlier performances, they were very good, but in patches, This one we were good probably throughout the whole lot if it, and that was heartening because we see it in training, how good the boys play. The players know we let ourselves down a wee bit in some of the games this year.

“There’s still a lot more work to be done. The shackles are off maybe in that you can play the game with a bit more freedom and I think we saw that here. We were very entertaining to watch but very sound defensively as well.”

“The important thing for us is when we had a lead this time we couldn’t have all youse writing again about how we couldn’t close games out. That was getting a bit boring, but it was true because we hadn’t been closing games out that we should have done, so it is important that we did that.”