All you need to know about Monday’s qualifier draw 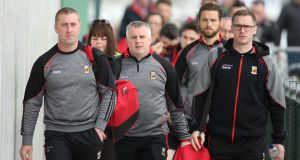 Mayo are in Monday’s draw for the first round of the qualifiers. Photograph: Inpho

The first qualifier draw of this year’s football championship takes place on Monday morning with 16 of the 19 teams beaten so far this summer in the pot.

The first-round qualifier draw will be broadcast live on Morning Ireland on RTÉ Radio 1 just after 8.30am and also carried live on gaa.ie.

The draw involves all of those teams who have been beaten and failed to reach their provincial semi-final. New York will play no further part in the championship, while Tipperary and Leitrim will enter the second round draw after semi-final exits.

Match venues and times will be confirmed by the CCCC on Tuesday afternoon with the fixtures scheduled for weekend of June 9th/10th.

All matches will be required to finish on the day.